Anti-Semitic Senate Hopeful Silenced by FCC, But Not Why You Think

That's not true, argues Miller. "They've got picture of me kissing babies. The works."

Furthermore, Miller estimates that some 25 million people heard his message this year thanks to his stint on Stern's radio show and his mentions in other media. "I was somewhat of a household name," he says. "It took me four years to get 25,000 hits on my website. I doubled that in a month's time earlier this year. How's that for campaigning?" 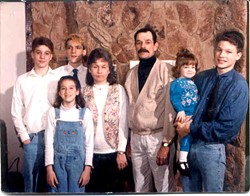 Miller, posing with the fam.
In 2006 Miller ran for Congress -- also as a write-in candidate. Like his Senate campaign he also advertised on radio. The only difference this year, he says, is that he included Kansas City radio stations.

"That's when the shit hit the fan," admits Miller, who says he's aired 257 campaign ads this year at between $10 to $25 a pop. "People in Kansas City started complaining."

Miller accuses the FCC of failing to fully investigate his campaigning and says they did not contact him after making a ruling. (The FCC could not be reached for this story.)

In any case, Miller has now set his sights on another agency: the ACLU.

"This is a classic case for them," he says. "I've left messages with their Kansas City office but it seems they're only concerned with protecting the free speech of communists and queers. "

Tony Rothert, legal director for the ACLU of Eastern Missouri, says the Kansas City office has no record of Miller calling them. That said, he doesn't see where Miller has much of a case given the way in which the FCC made its ruling.

"If they were making the decision solely on the content of Miller's speech, then I think he'd have a valid argument that his rights were violated," says Rothert. "But that's not the ruling the FCC made. This is about whether or not radio stations have to subsidize Mr. Miller's speech, and the ruling was that they do not."