Anybody Know a Lady in Missouri Who Breastfeeds Her Cat? 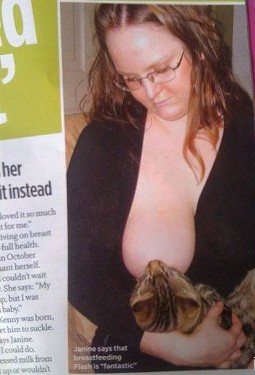 Not long ago, Daily RFT got an e-mail from a British documentary researcher in search of a Missouri woman who suckles her cat. Meow meow WHA?

It appears that a British tabloid called Closer recently ran a feature (not available online) concerning a certain Janine Hammond, who somewhere in our fair state has been offering her prosperous teat to her cat, Flash. Oh, and a guinea pig. AND a shire horse.

A handful of smutty British websites have excerpted the original story, in which our quirky 25-year-old tossed off the following delicious quotes:

"People will think I'm weird, but it's an amazing experience. Flash loves it, and feeds twice a day. Nobody should knock it until they've tried it."

"It's fantastic. His teeth and rough tongue skin tickle, but he's never one broken my skin."

Apparently, Hammond gave birth to a son, Kenny, who wouldn't get near his mom's ripe bazongas. The cat, however, was totally into it.  Quoth she, the mother:

"I hope Kenny and Flash will have a close bond. When Kenny is older I'll tell him and hope that he'll think it's cool."

I'm sure he will, Janine, and rest assured: nobody at school will ever give him shit about it, and definitely not ruin his fragile, adolescent self-esteem. Nobody. Of course, our British researcher informs us that:

"...interspecies suckling is fairly rare today, its presence in cultures around the world is much more common than many people would expect. It can be found among some indigenous people in the India, Papua New Guinea and South America."

And indeed, even American celebs do it. Take it away, Tori Amos!

But back to our story, see: the British researcher contacted Daily RFT because she's having trouble locating this Janine Hammond woman. And frankly, we know not where to start.