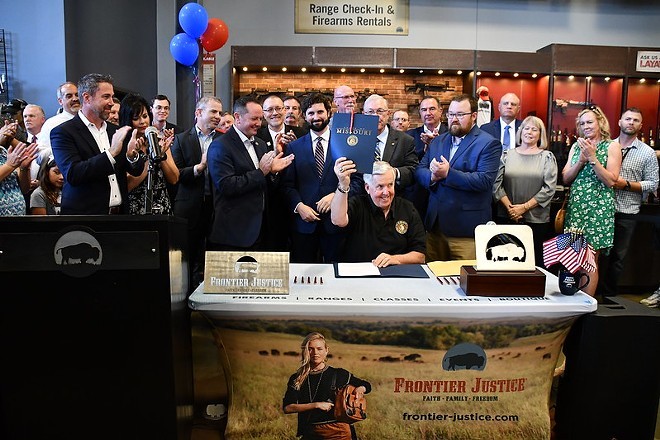 Mostly living in infamy for the clusterfuck that is the “Second Amendment Preservation Act,” which has caused many headaches for law enforcement and prosecutors alike, Burlison has now gone a step further in his quest to Make Missouri Murder More. His newest bill, which is both coincidentally and aptly dubbed Senate Bill 666, would shift gun laws to automatically assume someone using force is doing so out of self-defense.

Touting the measure as an update to the Castle Doctrine, where Missourians are justified in using deadly force to defend their property and themselves if they think their life is in danger, Burlison has none other than weenie-turned-wannabe-Senator Mark McCloskey as his No.1 supporter. You would think this would clue the senator in on what a shit proposal it is, but nope.

Opponents have taken to calling the proposed law the “Make Murder Legal Act,” and have spoken at length about the additional stress it will add to an already strained system, as well as their ability to help victims get justice for their assaulter’s actions. Burlison gives no fucks, however, because guns matter more than constituents.

But, hey, at least we get to keep our guns. Right, guys?

Jenna Jones is one of the digital content editors at the Riverfront Times. She would love to talk to you about Harry Styles.
Read More about Jenna Jones
Scroll to read more Missouri News articles (1)