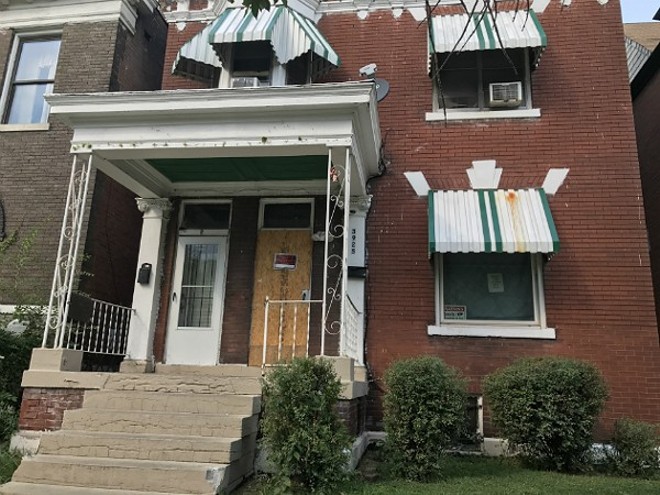 IMAGE VIA ARCH CITY DEFENDERS
A non-profit law firm continues to battle on behalf of tenants at a home on Greer.

On August 31, a judge ordered north city landlords Reginald Williams and Kimberly Franklin to stop interfering with their tenants' "use, enjoyment and possession" of their rental property at 3925 Greer Avenue — and specifically barred them from shutting off the utilities.

Yesterday, ArchCity Defenders alleges, the landlords did just that.

In a motion for contempt filed late yesterday with Judge Robert Dierker, the non-profit law firm charges that the landlords directed Ameren to shut off the power, violating the judge's previous order. The attorneys are asking Dierker to hold Williams and Franklin in contempt.

The legal battle is the latest front in an ugly battle between the dozen or so tenants of the north city home and their two landlords. As the RFT first detailed August 7, the tenants turned to ArchCity to stop the landlords from an illegal eviction. A cease-and-desist order halted their removal.

But that was far from the end of the story: The landlords then allegedly boarded up the house, barring one of the young couples living there from accessing the property — even as their baby was trapped on the other side.

The judge blocked that action. But now, the lawyers say, the landlords are ignoring his order. By shutting off the utilities when they've been ordered not to do so, the landlords could face fines.

The law firm said this in a prepared statement: "Our clients are stressed out, frustrated, and distraught. The landlord has continued to make their lives miserable and that is unacceptable. We are working to identify safe, affordable housing for our clients but even that has not been easy to do in this region. From the courtroom to the community, we will keep fighting for our clients."

The lawyers hope to get a hearing in court today.

Advocates have pointed to situations like the one at 3925 Greer to argue that illegal evictions have become a huge problem for low-income tenants. Alderman Terry Kennedy has introduced a bill at the city's Board of Aldermen that would seek to creak down on such unauthorized actions, threatening bad landlords with fines of up to $500 and jail time.