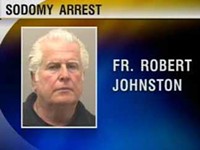 courtesy of SNAP Midwest
Robert Johnston: not the archdiocese's fault that they hired a perv.

Score one for the Catholic Archdiocese of St. Louis. Because, as a legal ruling today makes clear, even if a Christian ethicist would hold the church accountable for allowing a predatory priest to run roughshod, well, by gum, the Constitution doesn't. That's the First Amendment for you.

In an opinion issued today, the U.S. Court of Appeals for the Eighth Circuit concluded that the archdiocese can't be held liable for negligent hiring and negligent retention and supervision of a defrocked priest -- even though the priest once admitted to performing oral sex on a fourteen-year-old boy.

The priest, Robert Johnston, was defrocked in 2002 after a witness came forward alleging sex abuse. According to a Belleville News-Democrat clip we dug out of Nexis, Johnston had been a priest at Sacred Heart Catholic Church in Valley Park; he later admitted to performing the sex act in 1978.

But the claims of three men and a woman who filed suit against him in 2009 reached a serious roadblock today, with the appellate judges reversing a lower court ruling that would have held the archdiocese in St. Louis responsible for Johnston's behavior.

Shane Perry, Matthew McCormick, William Goebel and Angela Ohl-Marsters had sued the archdiocese, claiming negligence in its hiring, retention and supervision. While the U.S. District Court allowed those claims to stand, the archdiocese appealed -- arguing that the Missouri Supreme Court had given it a special exemption on such claims, thanks to the First Amendment. After all, "questions of hiring, ordaining and retaining clergy" could foster "excessive entanglement between church and state." We can't have judges telling the Catholic church who to hire -- or even to avoid pedophiles -- without getting the government all up in their right to practice their religion. Or so the argument goes.

The U.S. District Court brushed that aside, saying that since the case was in federal court, it didn't need to follow Missouri precedent -- and, anyway, under its analysis, it was rejecting the Missouri Supreme Court's reasoning.

The appellate court overturned that decision today. "It seems highly likely the Supreme Court of Missouri would bar the negligence claims under the Missouri Constitution, if its First Amendment analysis were later abrogated by the Supreme Court of the United States," the appellate justices concluded. They then tossed the case back to district court for further proceedings.

The four plaintiffs, all Illinois residents, allege that Johnston molested them for three years while they attended St. Maurice's Catholic Church and School in Morrisonville, Illinois, which is not far from Springfield. According to their initial complaint, they were introduced to Johnston by their parish priest, and he subsequently fondled and sodomized them at a St. Louis County lake house, at a Cardinals game and on archdiocese property.

In 2005, Johnston was arrested by St. Louis County Police on suspicion of statutory sodomy. It's not clear whether he was ever convicted. UPDATE AT 12:55 p.m. Following our post, the Survivors Network of Those Abused by Priests, better known as SNAP, issued this statement about the ruling: We are terribly sad for these brave, wounded victims of Fr. Johnston and the Catholic hierarchy. Abused by a priest, they have now been further abused by the archdiocese, which insists on exploiting every legal technicality it can to hide the truth about clergy sex crimes and cover-ups. Bishops can claim to be "reforming," but as long as they fight tooth and nail to deny victims their day in court, their claims will continue to ring hollow.