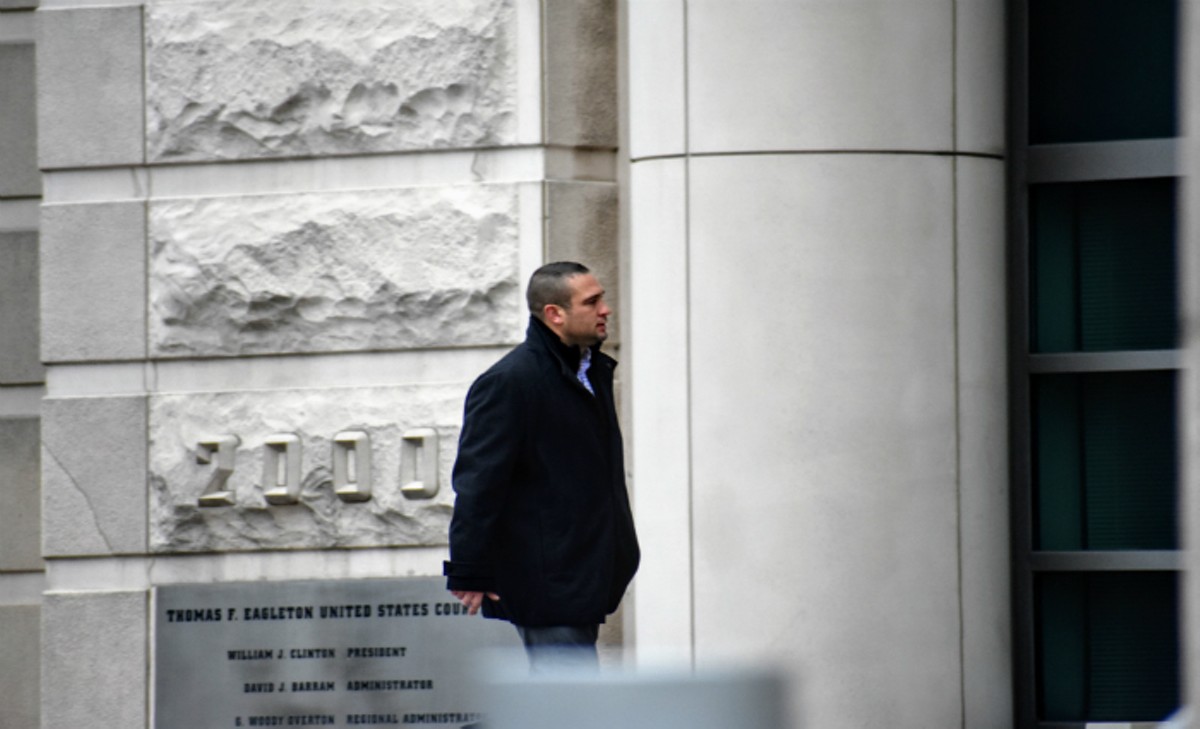 Texts don't lie, and they don't go away. And sometimes they bear repeating.

Here are some literary samples from the mobile device of police officer Dustin Boone, texting a fellow officer as they prepared two years ago to encounter a protest gathering of some of the citizens they're sworn to serve and protect:

"The more the merrier!!! It's gonna get IGNORANT tonight!! But it's gonna be a lot of fun beating the hell out of these shitheads once the sun goes down and nobody can tell us apart!!!"

"I'm on [Sgt **'s] arrest team! me and a BIG OL black dude r the guys that are hands on! No stick or shield ... just fuck people up when they don't act right!

"That's my dude today! Haha he's basically a thug that's on our side!! It's he and I that just grab fuckers and toss em around."

"We really need these fuckers to start acting up so we can have some fun."

Well, it turns out author Boone got his wish. His texts were sent on September 15, 2017, the day that ex-St. Louis officer Jason Stockley was found not guilty of murdering Anthony Lamar Smith, who he shot and killed following a police chase. That all-too-familiar, white-officer-shoots-black-supect storyline.

On day two of the protests, Boone texted, "This shit is crazy ... but it's fucking AWESOME too! Except for cops getting hurt. People on the streets got FUCKED UP! Lol." And this: "Just deployed to U city ... u will see the REAL POLICE come in and clear fuckers REAL QUICK. We ain't fuckin w them tonight."

There was this from day three: "A lot of cops gettin hurt, but it's still a blast beating people that deserve it. And I'm not one of the people hurt, so I'm still enjoying each night ..."

And this from day four: "We reloading these fools up on prisoner busses. As they got on we all said in unison 'OUR STREETS' haha."

I'll stop there, even though there's more joyful prose from Boone's phone. That's because the "OUR STREETS" thing was corroborated on video that's annoyingly difficult to minimize or deny because, well, we all could see and hear it.

Specifically, a rather substantial number of officers appeared to be repeatedly chanting "Whose Streets? Our Streets!" in an outpouring of defiant emotion that did seem to channel, say, Red Square. And that brings us to the question of the day, two years hence: Just how much of an outlier is Dustin Boone?

I wish I was certain Mr. Boone is an aberration. As someone who doesn't risk his life to go to work every day, I have great respect for those who do, be they police officers, firefighters or other first responders. I'd really like to think that the large majority of police officers would be aghast at Boone's prosaic texts and the conduct they appear to have documented.

But I don't know. I'm only writing about Boone because he got caught. He and two other officers are currently under federal indictment in connection with the savage beating of one Luther Hall, who had been a fellow police officer of Boone (except for the African American part) but was allegedly attacked by Boone and officers Randy Hays and Christopher Myers while working undercover to keep eyes on the protestors from within.

It's worth noting the accused are innocent until proven guilty. A fourth officer, Bailey Colletta, has already confessed to lying for the others and is due to be sentenced in December.

For now, Mr. Boone is back in the news as a defendant in a civil lawsuit from Hall — targeting numerous officers, as well as Mayor Lyda Krewson and the city — and separately in a new class action lawsuit against dozens more officers as well. The lawsuits are so plentiful as to seem almost impossible to track: The ACLU has one that's apparently set for trial next month, and ArchCity Defenders filed at least a dozen or so. They seem endless. And they don't seem to be getting tossed for lacking merit.

Hall's civil suit reintroduced Boone's textiness — although the sanitized, redacted form doesn't do justice to the writer — but more important, it reminds us two years after the Stockley protests that we really have a problem here. In fact, St. Louis has a crisis of confidence in policing and race relations, and Boone's work must be part of the discussion.

Is Boone really an outlier, or a symptom of that problem? Even accounting for the fact that lips get sealed when the lawsuits are flying, where is the indignation from good police officers — and from the city and the department — over the now very public words on Dustin Boone's cellphone?

It would really be nice if we felt the collective outrage from police about Boone that we hear, pretty much on a daily basis, about Circuit Attorney Kim Gardner. But we've never heard it, and it doesn't appear that we will anytime soon.

It would be easier to sympathize with the police side of this story if, in real time, on the nights of the protests, then-acting Chief Lawrence O'Toole hadn't stood up publicly, with an approving Mayor Krewson at his side, and heaped praise upon the conduct of his officers. Surely they hadn't seen Boone's texts, but they knew — and condoned — more about the "fun" that some officers had been having.

Yes, Krewson did start walking back her high praise of the police, pretty much on a nightly basis, as the embarrassment unfolded. But Hall's lawsuit was shocking as it referenced a moment — somehow not remembered by the mayor — in which she shares an elevator ride with him on the night of his beating (after having had him picked up by her security people) and observed "Oh, they messed up your cute face."

I don't know what to make of that, except that this is certainly a "what did she know and when did she know it?" moment in this awful chapter of our history. Yes, she ultimately passed over O'Toole for chief in favor of Chief John Hayden Jr., an African American police veteran who promised to "rebuild trust, stem violence" when hired by Krewson a few months after the Stockley protests. But it wasn't accompanied by any mea culpas about anything.

Maybe Hayden has raged about what happened to Hall and it just didn't make it into the media. Or maybe I missed the stories. But even if he can't comment about pending litigation, does anyone even know what he thinks about any of this?

More important, I'd really like to think Krewson and Hayden and Public Safety Director Jimmie Edwards and those under their command are mad as hell and aren't going to take any more of this. I really want to believe the sort of unbridled racism revealed by Boone has people of all races losing their minds with anger.

But last week, they convened a "crime summit" (or whatever) with Gov. Mike Parson and County Executive Sam Page and excluded Gardner — and her county counterpart, Prosecuting Attorney Wesley Bell — while including the region's leading white prosecutor, U.S. Attorney Jeffrey Jensen. Really?

I really want to believe that Dustin Boone and his texts have no relevance to anything in St. Louis going forward. But like a lot of others, I'm still waiting for a sign.

Because those texts don't go away.