Are Months-Late Wedding Pictures Better Than None At All? 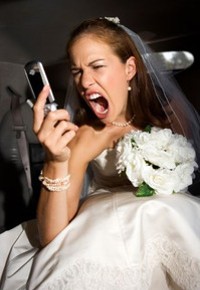 image via
UPDATED with a correction 12 p.m. November 17

If there's one thing recent Better Business Bureau reports have taught us, it's that not all weddings result in a happy ending.
No, stupids, we're not talking about divorce!
The BBB issued an alert about Fotos 4 Life late last month, warning locals against choosing Jennifer McConnell's Craigslist-advertised wedding photography service. Daily RFT spoke with two brides/victims, including Kathleen Dorlac, who hasn't seen one frame that the photographers shot at her May wedding.
But a new character has sidled into Dorlac's fairytale-wedding-gone-wrong: A white knight and his professional lens, looking to make things right.
After the BBB report was released, McConnell promised to get the wedding pics to all the photographically-jilted couples within a week. Dorlac says that she hasn't heard personally from McConnell (she managed to get McConnell's boyfriend/general manager on the line once, only to have every subsequent call since sidestepped). She told Daily RFT that "at this point, I don't think I'm going to receive anything from her."
"I'm trying not to get my hopes up anymore, because it's too frustrating when nothing happens."
Enter Derek Cadzow, proprietor of Love and Life Photography. After seeing Dorlac quoted in a media report, Cadzow stepped up to the plate and offered her a free portrait session with her new husband.
Dorlac says that she and her hubbie (approaching their half-versary, aww) plan to take Cadzow up on his offer, though she was "very surprised" when she heard about his gesture of kindness.
"After everything that's happened, it's nice to have someone with no connection to me or to Fotos 4 Life to step up and volunteer to do something for us," she says. "I wouldn't have expected that from anyone, and it's very refreshing to see that there are people out there that just want to do whatever they can to try and make up for something someone else did wrong."

CORRECTION: A previous version of this post incorrectly stated Cadzow's offer. He contacted Dorlac after hearing she'd been a victim; he did not offer free portraits to every couple who got screwed by McConnell. While he says he'd be happy to hear from anyone in her situation, he's not sure just how many brides have been affected and can't make any guarantees.