St. Louis County Circuit Attorney's Office
Todd Hilgert, of Affton, was taken into custody after threatening his mother-in-law with a gun, demanding $300,000 to "walk away" from his marriage with her daughter.

The St. Louis County Prosecuting Attorney's Office has charged an Affton man with Burglary and unlawful use of a weapon after he broke into his mother-in-law's house and demanded $300,000 to "buy him out" of his marriage with the victim's daughter.

According to a Kirkwood Police Department probable cause statement, on Tuesday 44-year-old Todd Hilgert entered his mother-in-law's house in Kirkwood through a sliding glass door.

Hilgert allegedly asked his mother-in-law for $300,000 to walk away from the divorce proceedings. 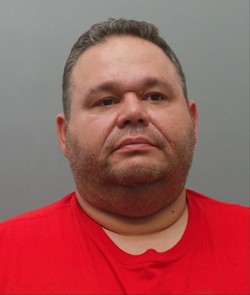 At this point, Hilgert allegedly pulled out a handgun and pointed it at his mother-in-law. As he pulled out the gun, a knife fell out of his pocket onto the floor.

Police allege Hilgert said he was in his mother-in-law's residence to "harm" and "mess up" her husband, who was not home.

Police responded to the residence and arrested Hilgert, who told officers he had a knife, mace, brass knuckles and a handgun in his pocket.

Officers seized the items, the probable cause statement says. Police say Hilgert "admitted to entering the victim's residence through a sliding door and demanding $300,000 to buy him out of the marriage." He added that he did brandish the handgun as well.

"Divorces are messy enough without armed threats and attempts to shake down your in-laws for money," St. Louis County Prosecuting Attorney Wesley Bell said in a statement.