Google Maps
The Army Corps of Engineers is trying to convince people that Jana is safe after a report came out saying the school was contaminated with radioactive waste.

Can students and staff safely return to the shuttered Jana Elementary School?

That was the question on the mind of Sandy Strickland Jr., when he walked into an open house Thursday night sponsored by the U.S. Army Corps of Engineers.

But at the end of the three-hour event, during which corps personnel repeatedly stated their tests showed that Jana Elementary did not harbor dangerous levels of radioactive waste, the jury was still out for Strickland, the father of two Jana students.

“We got a lot of information here,” Strickland said. “I am an information person. If you give me the information, I will soak it in and make my own rational answer after that.”

The Hazelwood School District Board of Education abruptly closed the Florissant grade school in mid-October and ordered its nearly 400 students to take online classes after a report drafted by a private company — Boston Chemical Data — indicated dangerous levels of radioactive waste both inside the school and on its surrounding soil. The waste emanates from nearby Coldwater Creek, which was contaminated by Mallinckrodt Chemical Co. as part of its nuclear weapons work for the federal government during the 1940s and 1950s.

MIKE FITZGERALD
Sandy Strickland, a concerned Jana parent, visited the Jana open house. He was not convinced the school is safe.

Strickland was one of the few Jana parents to attend the Army Corps open house, held at the Florissant Municipal Court.

Most Jana parents were tied up with a “Meet Your New Teacher” event held at the same time at the five Hazelwood grade schools their kids will attend starting on November 28. Meanwhile, the Board of Education is figuring out its course of action with Jana and other schools in the Coldwater Water Creek floodplain that could also be contaminated.

Phil Moser, a corps program manager, gave a presentation that tracked closely with the one he gave just two nights before to the Hazelwood School Board, during which he noted the corps had collected hundreds of samples both inside and outside the 50-year-old grade school.

While the corps found contamination in the banks along the creek, their tests “did not indicate any contamination moved into the school itself,” Moser said. “What we found is that the results show no presence of radioactive material above the range of background levels in there.” 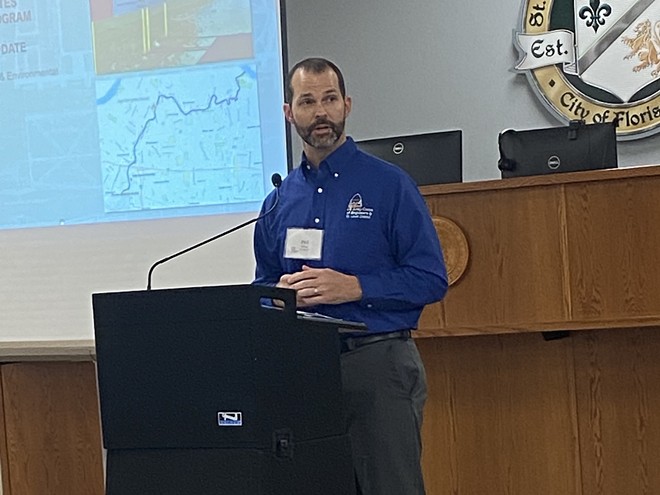 Moser refused to comment on the Boston Chemical Data report — which emerged as a result of a federal lawsuit — or a report also presented at Tuesday’s school board meeting by SCI Engineering of St. Charles, Missouri, which gave Jana a clean bill of health. The school district had hired SCI to provide an independent analysis.

But Dawn Chapman — the co-founder of Just Moms STL, a group that aims to educate the public about radioactive Superfund sites in North St. Louis County — questioned SCI’s independence, noting that one of its chief clients is the Army Corps.

Chapman urged all three entities — the corps, Boston Chemical and SCI — to meet in the same room and hash out their differences.

“And find a solution for these kids,” said Chapman. “And find a way to expedite. Because I think there are pieces of truth in each of these reports.”

The fact the Army Corps was even holding an open house can be credited to Christen Commuso, an outreach specialist for the Missouri Coalition for the Environment.

For years the corps had refused to disclose publicly the results of testing on Jana school grounds and along the banks of Coldwater Creek. Finally, in the spring of this year, Commuso filed a federal Freedom of Information Act request with the corps. The information she received by May showed the presence of radioactive waste. In June, Commuso disclosed this information to the Hazelwood School Board, triggering the first in a series of difficult decisions.

During the board’s July 19 meeting, President Betsy Rachel tried to convince fellow board members to approve her idea of posting warning signs along the creek banks where it ran by Jana, informing people that the Army Corps had discovered radioactive waste on school grounds.

But board members pushed back against Rachel’s idea and against sending out letters informing Jana parents of possible dangers from radioactive waste.

Board member Kevin Langley, during that meeting, noted that people in the area had for many years been aware of the dangers of toxic waste.

“We are one small part of an overall community that’s been addressing this issue for over a decade,” Langley said, according to a video of the meeting posted to Facebook. “I don’t know that there’s anything further that we could possibly do to make anybody more aware than they already are…If they don’t know, and they’re living in the area, then they’ve just been living under a rock.”

Rachel continued to push for the idea of warning the public, even though she could tell she was the only member supporting it.

“To me it’s irresponsible to not at least inform our families that the Army Corps of Engineers says we at least found this radioactive waste on your property, period,” she said during the July 19 meeting. “It’s OK that everybody else disagrees with me. I can accept the will of the board. But I need to be on record with my own personal feelings about that because I feel very strongly about it.”

Ashley Bernaugh, Jana’s PTA president, said word of the school board’s inaction soon got out, spurring her activism and that of other Jana parents.

Those efforts accelerated in mid-October, when the author of the Boston Chemical Data report emailed it simultaneously to the school board, Bernaugh and other stakeholders.

“If it had just gone to the school board it may not have gone anywhere,” Bernaugh said, “or at least it could’ve taken a while.”

Bernaugh repeated her call for the re-opening of Jana Elementary.

“But it must be remediated,” she said.

Chapman, the founder of Just Moms STL, blamed the many years of delay in dealing with the problem of radioactive waste in the Coldwater Creek floodplain on the fears of local leaders opening the door to challenges with expensive solutions.

“That’s the problem,” she said. “I think everybody’s afraid that they’ll make this problem big and yet still they’ll be limited on the funds to fix it.”

Commuso, whose Freedom of Information Act sent up the first red flag, said she was glad the Army Corps has chosen to be more forthcoming, but she found fault with the format of Thursday’s meeting. Commuso noted that all questions from attendees had to be submitted before the meeting began, in writing, with the names of questioners withheld. Anyone with further questions had to talk to corps personnel one-on-one at the tables along the wall.

Such a format “leaves people out of conversations, when you have to go table to table,” Commuso said. “Maybe I don’t know to ask a certain question, but somebody does but I missed out on that. Conquer and divide.”

But she also declared her happiness over the corps’ deciding to lean in on transparency.

“It’s just unfortunate it wasn’t always this way,” she said, referring to both the corps and the Hazelwood School Board.