Greg Stinson and Nichole Torpea with Murphy in happier times.

Greg Stinson and his fiancee, Nichole Torpea, were both at work on Monday (he at Ralston-Purina, she at a St. Charles garden center) when they began receiving frantic messages from a neighbor they barely knew. "Your house is on fire. You need to come home now!"

They rushed back to St. John, the north St. Louis County municipality where Stinson had bought a home in 2003. But it was already too late.

"At that point, everything that had been done was done," Stinson says.

The house was a burnt shell. Virtually all of their possessions had been destroyed. And their dog, a beloved lab mix rescue named Murphy, was dead.

Naturally, Stinson found himself questioning his actions that morning. "You think about tea kettles, and candles, or a curling iron, or that faulty electric cable -- all the things you should have fixed and never did."

Investigators on the scene quickly zeroed in on something else. They wanted to know how many gas cans had been in the garage, Stinson says. As it turns out, one can that had been newly filled was missing. Fire officials told Stinson and Torpea that they believe someone poured the fuel liberally throughout the house before it was set ablaze, Stinson says, making for a quick, and deadly, inferno.

(Reached by Daily RFT, Geoff Fish, assistant fire marshal for the Community Fire Protection District, could confirm only that the fire was suspicious in nature, and that it's under investigation. He also confirmed that Murphy had been killed.)

The fire was shocking for a number of reasons: The fact that it was set in broad daylight in a quiet neighborhood. The fact that neither Stinson nor Torpea could think of anyone who wished them harm. The utter pointlessness of it. They now believe either a thief or a kid intent on vandalism swiped their coin jar and rifled through their drawers, taking a few credit cards and some camera equipment before pouring the gas and lighting the fire. Far more valuable possessions were left to burn.

But what happened next, Stinson says, has been perhaps an even bigger shock than the arson.

A coworker at Purina, Rick Swensen, put up a GoFundMe page, seeking donations to help the couple. Almost immediately, and with zero publicity beyond word of mouth, it blew up -- generating more than $27,000 in just 24 hours. Other colleagues and friends dropped everything to bring by supplies and household essentials.

"You see the level of generosity..." Stinson says. "It just kind of blew my mind." The last two days have been a roller coaster, he says. And yet, "We cried more over the love we felt from our friends than over all the crappy stuff that happened."

Swensen himself was shocked by how quickly the crowd-funding campaign took off. "My heart was just broken for him -- that dog was like family to them," he says. He initially thought the GoFundMe page could raise just a few thousand to help cover the basics before insurance kicked in.

The crowd-funding campaign initially took off thanks to his Purina colleagues, a close group. But another reason it found such massive success was the goodwill Stinson has generated within St. Louis' tight-knit music community. He's a member of the pop-punk band the Humanoids, as well as '90s cover band the VCRs, and his house has long been a haven for members of the scene. (Stinson also played with two bands along with RFT's music editor, Daniel Hill, Step On It! and Kill Me Kate.) 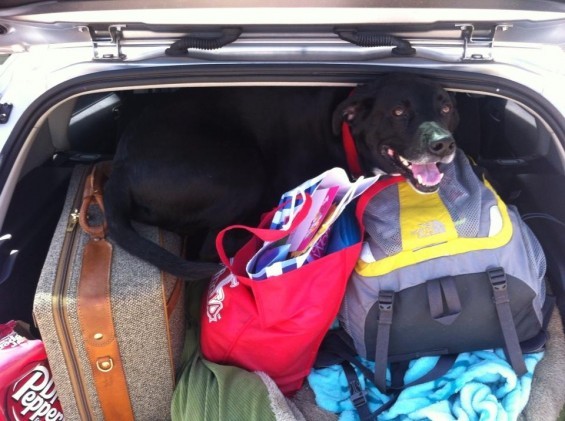 Ryan Wasoba, an RFT contributor who used to be a part of the rock band So Many Dynamos, recalls the house's central place in St. Louis' punk scene.

"It was a frequent place of lodging for out-of-town bands, and a makeshift studio when Greg's old band Step On It! made their record," Wasoba writes in an email. "So Many Dynamos used to practice in Greg's basement, and we wrote and rehearsed our When I Explode album in that house. I definitely think the energy of that environment made a big impact on the music we were writing at the time."

Murphy was a part of that. Adopted at three months old after he turned up at Stinsons' parents' house, "I took him home, where he proceeded to destroy most of our things and terrorize the touring bands who would stay after shows," Stinson recalls. Yet after a year, the pup became a docile, loving part of the family.

"His chill, couch-loving, bed-crashing demeanor brought so much love every single day," Stinson recalls. "Without a doubt he was our best pal."

Stinson and Torpea have been planning an October wedding, which might make the events of the last week just about the worst thing that could possibly happen, at the worst possible time.

But for now, Stinson is focused on the support they've received -- not all they've lost.

He says,"The only thing that's on my mind right now is the positive stuff. You wish that everyone in the world could experience how many people love them, and how many people care.

"If everyone knew this love was all around them, even the guy who broke into our house -- even he wouldn't be like that anymore."

See the GoFundMe page set up to help Torpea and Stinson.