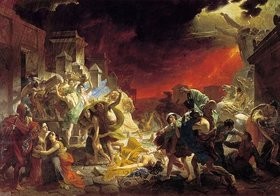 "The Last Day of Pompeii" by Karl Briullov
End-times: Jackson County on Wednesday?

Where will you be during the Second Coming of Christ? You might want to consider Jackson County, Mo.

In the final days of the presidential campaign, a 2007 video of Mitt Romney angrily (and somewhat hastily) explaining the end-times theology of Mormonism has become an internet sensation. In the video, shot off-air during a radio show by secret camera (damn them!) Romney is asked about the Second Coming of Christ, which some Mormons believe will happen in Missouri.

In the video, a very testy Romney argues with Jan Mickelson, the host of a popular conservative show on WHO-AM in Des Moines (the video and a couple others of Romney answering questions about the Church are at the end of this post):

Christ appears - it's throughout the Bible - Christ appears in Jerusalem, splits the Mount of Olives to stop the war that's coming in to kill all the Jews. Our church believes that. That's where the coming and glory of Christ occurs. We also believe that over the 1000 years that follows, the Millennium, he will reign from two places, that the law will come forward from one place--from Missouri--and the other will be in Jerusalem.

Now post-apocalyptic biblical literalism will make any religion look pretty kooky, but we bet you never thought Missouri might be one of God's two go-to command centers after Armageddon rolls around.

So how did Missouri become the Lord's chosen land? We did some digging at the library and humbly present some FAQs: