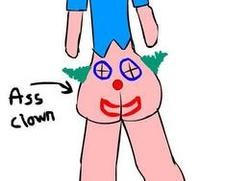 Something tells me this week's Ass Clown is going to be a landslide, but we'll let you the reader determine that. You know the rules: vote for the local yokel whose words or deeds you found to be the most humiliating and/or shameful.

1. Anthony McGowan: The Collinsville man arrested on burglary charges after a high-school football player saw McGowan breaking into a home and repeatedly tackled and bear-hugged the suspect until police arrived.

2. Jessica Bradshaw: The scorned gay lover from down in Lincoln County who mailed her ex-girlfriend's new lady several threatening letters and packages, including a cow's tongue (wrapped in a tampon box) and a severed opossum's head.

3.Shawn Boyer, Kevin Ritrovato and Sean Baker: The Jefferson County bail bondsmen accused of torturing a probation violator by wiping pepper spray on the man's genitals and then driving him around in a hot car and allegedly demanding oral sex in return for a sip of water.

4. Sylvester Childress, a.k.a. "The Candyman": Known for selling candy, soda and other snacks to children in his Caseyville neighborhood, Childress was arrested this month for also vending certain adult treats, namely nose-candy and marijuana.