At 16, Jessica Estes Was Shamed by a Crisis Pregnancy Center. Now She's Speaking Out 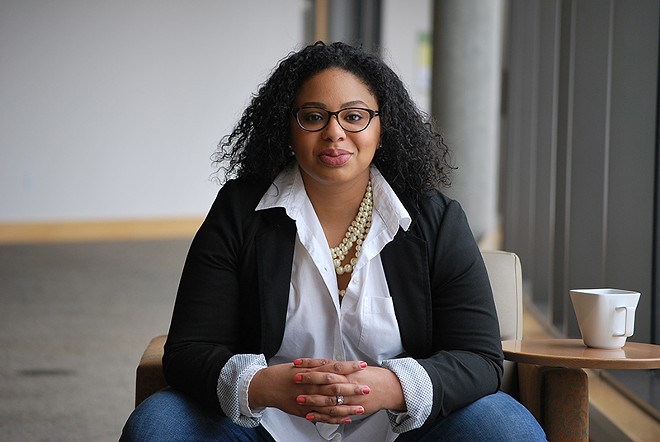 When she was sixteen and worried that she was pregnant, Jessica Estes wound up at a Birthright clinic in St. Louis. It was free, for one thing.

"It looked just like any other clinic," she recalls. But it wasn't. Rather, Birthright is a "crisis pregnancy center," and the organization's services — as well as its funding from the state — are tied to its efforts to dissuade women from seeking abortions. As a teen, Estes thought she was talking to medical professionals, doctors and nurses. It's likely that she wasn't.

That sort ambiguity is at the center of a U.S. Supreme Court case known as NIFLA v. Becerra, which begins oral arguments this morning. The case pits a national pro-life group against a California law mandating that crisis pregnancy centers inform clients about their stance on abortion services and to disclose whether there is a licensed medical professional supervising the facility. The clinics say the law violates their First Amendment rights.

"There's this illusion that it's a clinic," says Estes, now a statewide organizer for NARAL Pro-Choice Missouri. Along with other Missouri abortion rights activists, Estes made the trek to the nation's capital yesterday; today she's scheduled to speak at a rally on the steps of the Supreme Court.

She says her speech will cover her own experiences with Missouri crisis pregnancy centers, particularly how these clinics market themselves to women of color.

"It's preying on women who are vulnerable," she says. "I was a young black girl sitting across from an older white woman, and I remember a lot of shaming about being sexually active, a lot of shame about the purpose of sex, which is to have a baby." (She says they gave her a pregnancy test, but it was negative.)

It wasn't until more than a decade later, when Estes joined NARAL, that she says learned how these "fake clinics" operate.

NARAL, in fact, provided the key research cited by the California legislature as it crafted the law now being fought over in the Supreme Court. The organization has faced a more hostile audience in Missouri. Last year, during a special session ordered by Governor Eric Greitens, Missouri's legislature passed a law that did just the opposite, banning municipalities from enacting laws that sought to adversely affect "an alternatives [sic] to abortion agency or its officers', agents', employees', or volunteers' operations or speech."

"Missouri is in a particularly bad spot," Estes says. The state's 2018 budget allocates more than $6 million to pregnancy centers; of that total, about $4 million is diverted from federal welfare funds. As a condition for receiving the funding, the centers are prohibited from providing abortions or referring women to an abortion clinic.

And while the state continues to toy with additional cuts to welfare for individuals and families, the money keeps pouring in to clinics that often represent themselves as medical facilities, even when they're not.

For now, the Supreme Court's deliberations over the California law won't change that. But NARAL Missouri director Alison Dreith points out that a Supreme Court decision in California's favor could impact local abortion rights laws in the future.

"It would certainly give other states the authority to pass a similar policy that California did," she says. And even if the law can't pass the Missouri legislature — and realistically, considering the glut of anti-abortion laws proposed every session, it can't — St. Louis' own Board of Aldermen could pass its own law to force crisis pregnancy centers like Birthright to be up-front about their medical bonafides and stances on abortion services. Sure, that would put the city in conflict with Missouri's state law, but Dreith says the city could then point to the U.S. Supreme Court decision in its defense.

"The First Amendment doesn't give you the right to lie to women," Dreith argues. "If a crisis pregnancy center or other entity wants to exist, they can be a resource, but they shouldn't be able to lie shame and stigmatize women in a really vulnerable time of their lives."