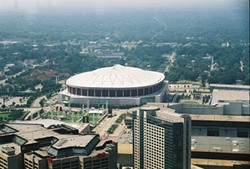 Georgia Dome: 18-years-old and over the hill.
The Atlanta Falcons last week said that the Georgia Dome -- built in 1992 -- is too out-dated to suit the team's future needs.

The franchise wants a new, open-air stadium  a.s.a.p. and says that ground could be broken on the new facility as soon 2012. The Falcons and motel taxes would pay for the structure -- estimated to cost less than the billion that Dallas and New York recently spent on new stadiums.

So what's this mean for St. Louis?

It means that its just a matter of time until the Rams demand the same. The Edward Jones Dome is just three years younger than the Georgia Dome. And one could argue, was never as nice as the Atlanta stadium.

Interesting thing about Atlanta -- that could perhaps work here in St. Louis, as well -- is that the city wants to keep the dome for conventions, NCAA tournaments and other major indoor events. Then again, Atlanta tends to be a bigger much bigger tourism destination than St. Louis -- especially for sports -- with the Georgia Dome twice hosting the Super Bowl and playing host to the Chick-Fil-A Bowl and the Southeastern Conference football championship.