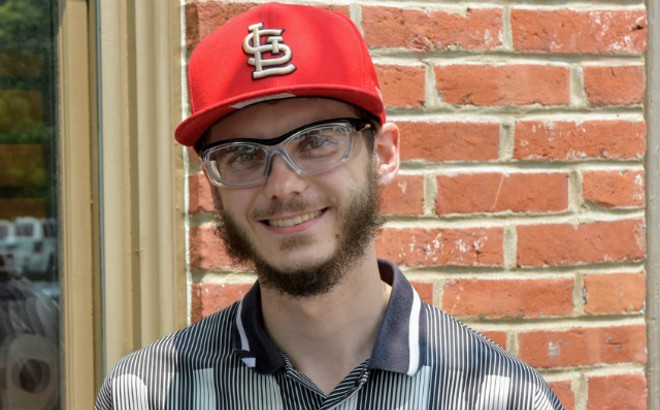 DOYLE MURPHY
Dzened Muhic says prosecutors are trying to make an example out of him.

In February, prosecutors from the St. Louis Circuit Attorney's Office decided not to file charges in a violent clash between a pickup driver and ATV riders.

By all accounts, there had been gunfire and a collision during the tense confrontation in the Bevo Mill neighborhood. But the sequence of events was in dispute, and prosecutors noted that both the pickup driver and an ATV rider who fired at him claimed self defense.

"Multiple experienced prosecutors reviewed the evidence, and there is insufficient evidence to prove this case beyond a reasonable doubt against either man," the Circuit Attorney's Office said in a statement provided to KSDK a couple of weeks after the incident. "This is a very troubling situation with no legal remedies under current Missouri law."

That, however, was not the end of the story. On May 28, prosecutors charged the ATV rider, 25-year-old Dzened Muhic of Bevo, with six felonies, including first-degree assault and unlawful use of a weapon.

Muhic says he was stunned. He had voluntarily gone to speak with police in February with his family's attorney, Justin Meehan. He turned himself in, provided investigators with a statement and surrendered the 9mm handgun, which was legally owned, that he'd fired. He was released without charges after little more than a day in jail.

"I thought it was behind me," Muhic says. He had even recently begun the process to retrieve his surrendered gun.

St. Louis defense attorney Kristi Flint, who has taken over the case, says her client has a "strong self-defense" claim and they're looking forward to putting the evidence in front of a jury.

As far as Muhic and his attorneys know, no new evidence has surfaced in the case. Court records do not indicate any additional information, and Circuit Attorney's spokeswoman Susan Ryan didn't respond to a request for comment.

But two things have happened since February: Police announced a crackdown on ATV riders, and the alleged victim in the case publicly blasted Circuit Attorney Kim Gardner at a neighborhood meeting in Shaw.

Muhic was caught in the middle, Meehan says, saying prosecutors plan to make an example of him.

According to court documents filed last week, Muhic was one of six to eight riders on ATVs and dirt bikes who were pulling stunts on Gravois Avenue in Bevo on February 2. A pickup driver, 55-year-old Jon Naggi of Jefferson County, later told police he honked at the group. Angered riders surrounded his truck, and one kicked out his driver's side mirror, authorities say.

Naggi veered into the center lane. When he heard shots, he drove through the Morganford intersection, running into Muhic's ATV while fleeing, police say in court documents.

Muhic describes it differently. He says he didn't see how the confrontation started, though he acknowledges that another rider busted out Naggi's mirror. Naggi swerved at the riders, but Muhic says he rode his Yamaha Raptor ahead of the group, stopping at a red light in front of Naggi's truck.

As he waited, the truck rammed him from behind, Muhic says. Police had described the collision as part of an evasive maneuver, but the 25-year-old says Naggi seemed to try to run him down intentionally.

"He came straight at me," he says.

Muhic claims he heard the truck's engine revving. Fearing he was about to be hit again, Muhic pulled out his gun and fired about five times.

"I was certain he was out of control or insane and trying to kill me or one of the others," he wrote in the statement he gave police in February.

Naggi pulled away from the group and called police from about a mile away. His window had been blown out, and investigators noted bullet holes in the frame, grill and engine compartment. He had wounds on his left forearm.

Much of the confrontation was captured on surveillance video. Meehan says the footage, which hasn't been publicly released, shows the pickup plow straight into Muhic from behind.

Naggi was upset when he learned later in February that no charges would be filed. He spoke to KSDK at the time.

"I feel like the justice system let me down again," he told the station.

He admitted to trying to hit Muhic, but claimed he had no alternative.

"He was in front of me, shooting," Naggi told the station. "The only choice I had to do was try to run him over."

Naggi later showed up at an April 9 meeting of the Shaw Neighborhood Ownership Model, a neighborhood group focused on reducing crime. Gardner was the featured speaker. During a question-and-answer session, Naggi introduced himself and grilled the circuit attorney about the case.

"Nobody returns my calls," he told her.

"You can talk to me, and we'll talk to you after," Gardner said.

"I'm $45,000 in the hole, because my truck got totaled," Naggi continued as Gardner explained that she wouldn't speak about specific cases at the open forum. "I got pelted with ten bullets, shot in the arm. My daughter, I just dropped her off five minutes before that or she would have been dead."

But Naggi interjected: "And the guy came in and claimed self defense, and it's all on film, and nobody wants to look at my case."

A moderator was eventually able to cut him off, but not before Naggi secured a promise from Gardner.

"I will look at your case," she said.

The exchange was recorded on video, which you can see here. (It begins at 24:55.) Naggi didn't respond to messages from the RFT.

One month later, on May 9, St. Louis police issued a press release announcing a crackdown on ATV riders. The department had been taking heat for ignoring bands of daredevils in south city. One woman told Fox 2 riders chased her and one brandished a gun in a frightening encounter.

Police told the station that no city ordinances addressed ATVs, although state laws bans them from roadways. But what caused the most outcry, as noted in an RFT story, was that Fox 2 quoted police saying there was little they could do, because riders often flee and the department's no-pursuit policy kept officers from chasing them.

Two days after the Fox 2 story, police Chief John Hayden said in a statement the "police department has been made aware of large groups of ATV riders creating disturbances through the city." As a result, officers would arrest any riders they caught on city streets and tow their vehicles. The new edict was "effective immediately," the statement said.

In the following days, police detailed their busts on social media. Mugshots of riders were posted alongside photos of their seized ATVs, loaded on flatbeds. Police included the hashtag #NoATVsAllowed.

Over the weekend, officers were able to arrest Corey Booker at Jefferson and Olive and tow his ATV. The @stlcao issued one count of "Unlawfully Operate All-Terrain Vehicle Upon Highway". #NoATVsAllowed pic.twitter.com/QDLRgrPkDb


Muhic says he gets the concerns, but says that hatred for ATVs comes from those who don't understand the culture. He started riding about a year ago and sees it more as a family.

"It brings all types of people together — black people, white people, foreigners," he says. "We're not out here to cause people trouble, to make people's lives harder, to harass people."

As for his gun, he says it was legally owned and registered. He says had hoped he would never need it but had learned first-hand about the potential for danger. His best friend, Haris Gogic, was murdered six years ago in a Bevo cell phone store robbery.

"We live here in the most dangerous city in the world," he says. "I'm a skinny white guy. I've got all of 130 pounds on me. I look like an easy target."

The son of Bosnian refugees, he says he studied hard at Ranken Technical College and landed a good job as a tech installing automated systems, such as temperature controls, in buildings. Riding became a fun hobby and a way to meet new friends. Now, he worries that the rising animosity toward ATV riders, fueled by public pressure, will cost him his career and freedom.

"You can't look at it like, 'I hate those guys on quads, let's get this guy,'" Muhic says.

Under Missouri’s very broad self-defense law neither has an obligation to retreat if they are in fear of their safety, which they both claimed. While there is a video, it doesn’t prove who started the initial altercation, and the state has the burden to prove beyond a reasonable doubt that it wasn’t self-defense.

Multiple experienced prosecutors reviewed the evidence, and there is insufficient evidence to prove this case beyond a reasonable doubt against either man. This is a very troubling situation with no legal remedies under current Missouri law.