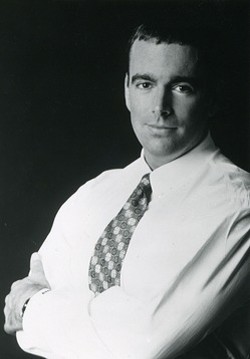 A BusinessWeek feature story that hit the Internets today, "Fall of the House of Busch," details the 2010 death of the girlfriend of August Busch IV, Adrienne Martin, and the sad life of the former beer baron in the wake of Anheuser Busch's sale to Belgian conglomerate InBev.

And while there's not much here that Busch watchers won't already know -- yep, we're talking about you, Daily RFT readers -- the story's a well-written exploration of the tawdry details we've become all too familiar with.
Writer Susan Berfield does a particularly good job of putting Martin's death in context of Busch's troubled relationship with his father, former A-B scion August Busch III, who ousted his own father in the early '70s and eventually helped sell the company out from under his son.

Even though the son was now CEO, August III remained on the board of directors and continued to land his helicopter on the roof of headquarters and go to his office. Sometimes called Three Sticks by employees, stubborn, brusque, and a bit of a bully, August III was generally considered an extraordinary businessman. Anheuser-Busch's U.S. market share increased from 23 percent to more than 50 percent during the 27 years August III ran the company. "People used to ask if the Fourth could handle it," says Reisinger, who worked at the company for 12 years. "The Third was not replaceable by any one person. Period. You'd need four or five guys to do what that guy did. ... From big ideas to little ones, there was one decider."

Yet August IV did have one quality his father did not: charisma. He was good-looking and good-humored, and for many in the industry he was a welcome contrast to his dad. Among the first things August IV did was try to reduce some of the company's most extravagant spending. He canceled an order for a new $40 million Dassault Falcon 7X jet, which his father was eagerly awaiting, and he closed the executive dining room, where his father used to eat breakfast every morning.

Old Three Sticks, of course, gets his revenge:

That spring, rumors of a possible bid for Anheuser-Busch by InBev, with which it had a distribution agreement, intensified. Busch [IV] was horrified. He told the company's wholesale distributors at their annual conference in April that a sale of Anheuser-Busch would not happen "on my watch." In May, Busch spoke to Anheuser-Busch distributors at a national beer wholesalers' meeting in Washington. Within a few minutes it was obvious something was not right, says Harry Schuhmacher, publisher of Business Beer Daily. On stage, Busch slurred his words and dropped his microphone. Executives said he had taken strong cold medication.

Within a month, InBev made its unsolicited offer, August Busch III threw his support to deal, and the rest is history. Two years after that, Adrienne Martin was found dead in a darkened bedroom in Busch IV's Huntleigh manse.

You can read the whole story, "Fall of the House of Busch," here. And if you'd rather spend this muggy Friday playing a board game, well, there's always this.