Send a News Tip
I've spoken in the past of the United Cardinal Bloggers project, I know. Well, see, it's the time of year when those of us who take part in such things all gather 'round the flickering monitor screen and take a vote. 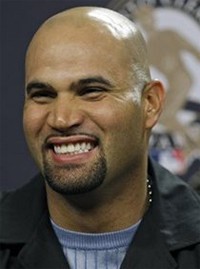 We vote on things large and small, exquisite and banal. And then, when all the votes are tabulated, the christening of the winners takes place in the UCB Fortress of Solitude. What? We can't have a Fortress of Solitude? Why not? Superman had one. Oh, I get it. You think that a 1978 Winnebago on blocks in my front yard doesn't qualify as a ''fortress.'' Well, let me tell you something. What it lacks in fortressness, or perhaps fortressocity, it more than makes up for in solitude. So there. Wait, there's something wrong with that line of argument... Damned if I know what it is, though. Oh well.

So anyway, this is my not-so-secretive ballot for the UCB Year-End Awards. (By the way, to view the original ballot and the UCB leader's choices, head on over to Cardinal70's blog.) Awards are after the jump.
Player of the Year: Look, this one really isn't much of a question. I mean honestly, who am I gonna pick? Albert Pujols. There's nothing to say about the man that can ever adequately describe his awesomeness, so I won't even try.

Pitcher of the Year: This is a little bit tougher. In the end, though, I've got to go with Todd Wellemeyer. Yes, Kyle Lohse was a pleasant surprise. And yes, Adam Wainwright was the Cardinals' best pitcher. But missing a couple months does count in my books, and when it comes right down to it, I would hand the ball to Welley in a big game before I would Lohse. The Colonel is my selection.

Game of the Year: May 6th, versus the Colorado Rockies, Cards won 6-5- this was the Ankiel Game; the game in which he had two of the most amazing outfield assists you'll ever see in you life at third base. He also hit a home run, too, but who cares about that? Of course, as amazing as those throws are, it only made you sad to realize he could never have duplicated either one from a mound. The best part of all? The look on Willy Taveras' face when he was tagged out. The guy never saw it coming.

Surprise Player of the Year: Got to go with Ryan Ludwick here. Come on, the guy had an MVP-type season at the age of 29 after having less than 1,000 major league at bats in his career. That isn't surprising. That's what we in the word-smithing business like to call a "goddamned miracle."

Disappointing Player of the Year: Ooh, another toughy. See, Chris Duncan was supposed to be this big time slugger, and he most definitely was not. But you know what? My feelings about Chris Duncan are pretty well-known by now, and they aren't exactly glowing. Ryan Franklin sucked something fierce. But that one was visible from a mile away; everyone should have seen it coming. Hell, I called it back in April, and I am by no means some sort of genius. No, when it comes right down to it, the biggest disappointment for the Birds this year was Jason Isringhausen, hands down. We all thought he was healthy; that he would be effective when Tony called his name. Look, we all saw the performance. I'm just going to let it go.

Cardinal Rookie of the Year: Not a huge competition here. Got to go with Kyle McClellan. Chris Perez is very exciting, and Joe Mather could end up being a very good player down the road somewhere. But K-Mac did the job pretty much all year, every time the bell rang. Well, up until a September that saw him pretty obviously gassed, I think. Still, I think McClellan is the clear choice.

New Cardinal of the Year: Kyle Lohse. See, I really wanted to vote for Troy Glaus here; I really and truly did. But this team seemed to have a dark cloud hanging right over it all through spring training. That all changed the day that Lohse signed. Suddenly, it seemed like every little thing was going to be all right. Plus, he ended up being a hell of a pickup. Lohse it is.

Most Anticipated Cardinal: You think I'm going to say Colby Rasmus, don't you? You think that anyone in their right mind would have to say Colby Rasmus. Well, you're wrong. Ever since the June draft, the legions of Cardinal fans out there have become obsessed with Brett "the Walrus" Wallace. Yeah, Rasmus could very well be great. (I happen to think he will be, anyway.) But you want buzz? You gots to go Walrus, baby.

Those are the awards given to the team, to the players, to the game itself. The rest of these are actual blogger awards. I prefer not to comment on my selections, because I don't want to bias anyone in any way if I can help it. I will, however, include links and hope you check them out for yourself.

And those, Ladies and Gentlemen, are my votes. I encourage you to check out all the blogs that I listed above; they're all really wonderful. Most of all, thank you to C70 for bringing this whole thing together. It's always a great time when the UCB gets together. Especially in our fortress.