Bar of the Week: Failoni's

The sign painted on the building said ''Air Conditioned.'' It needs to be cold in Failoni's in order to preserve bodies of the patrons within, whose leathery skin appears to be cooking from the inside out. So that may be a slight (very slight) exaggeration about the tans, but seriously, if you're pale and under forty, this is not your scene.

Usually, the Bar of the Week is chosen because of its cool/weird/sexy/ugly factor, but this week, a tip came down from Unreal that Failoni's in Dogtown was a hot, live cougar den in the city of St. Louis.

If you aren't familiar with the term ''cougar,'' you should read Unreal's extensive article on this fascinating topic. As a hardcore fan of the British cougars, Patsy and Edina, from the BBC show, Absolutely Fabulous and an avid local cougar spotter, I jumped at the chance to head to Failoni's.

This is what went down at the den:

Den decor: ''Antique Finished Italian Garage,'' would be the best way to describe the design aesthetic here. Photos of Frank Sinatra, encased in smoke-stained frames, cling to the walls, neon signs welcoming you to the establishment offer a seedy sparkle to the otherwise dank rooms. Leering men line-up against the walls outside the ladies room, which is so small that any woman larger than a size 4 is not going to make it inside.

Patio dwellers have the luxury of two port-a-pottys to use, so that we can watch them come out, not wash their hands and then eat a burger. The patio really is the best option, because it has its own bar and the air doesn't smell like cancer, like the inside does.

Feed: You get barbecue on this particular afternoon. Not that you want barbecue, it's just that it's your only option. After opting for the safety of a burger, the gruff cook comes out from behind the giant steel grill to ask you how you want it cooked. In this case, medium-well, translates into dried beef biscuit; you think you hear the cook laughing at you as you take a bite. You want something to drink? Budweiser or Miller. I asked for a Corona and was met with a blank stare. ''Never heard of it.'' Of course not.

Cougars and such: The plan was to send the young husband in as bait. In his mid-twenties, tall, dark and handsome, it was going to be like tossing one of the Jonas Brothers into an all-girls middle-school, without bodyguards. The carnage would be beautiful.

But wait, what's this? Something was afoot here at Thursday's happy hour; the cougars were here, all right, but they all had husbands with them. It was as if they had all read Unreal's article and had to prove to their spouses that they did not go to Failoni's to pick up men. There were no young men there, at all.

Such specimens the husbands were! Ultra-bronzed gods, decked out in white New Balance tennis shoes and tucked in polos, sporting just as many white shorts as their female companions, it was a sight to behold. Some had that, ''My suit costs more than your friggin' life'' look about them. Dangerous. 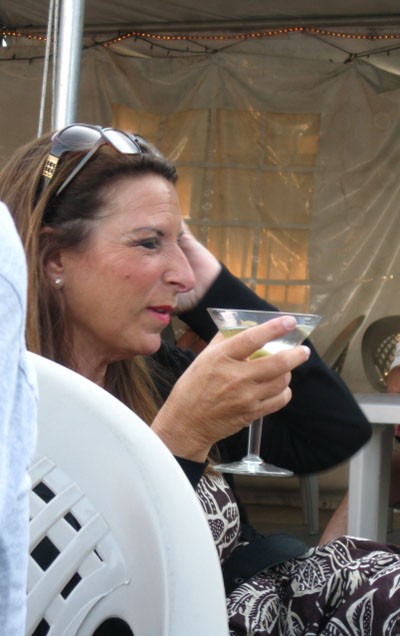 The cougars were not the ultra-snobby Patsy and Edina types I had so hoped for. Patsy and Edina would never do barbecue. They did, however share some essential characteristics: Virginia Slims, rough skin, hot pink talons, ankle bracelets, bad bleach jobs, animal print attire, bulky jewelry (a lot of turquoise), five layers of eyeshadow and gauche, bedazzled sandals.

Perhaps not every lady dressed like this was a cougar, you can't know until you see them in action, after all. Besides, there's nothing wrong with being fabulous and having some drinks out on the town with your friends, you know sweetie. Not in the grave yet, darling.

The husband bait plan didn't totally fail; he was ogled by some of the cougar husbands as he absentmindedly rubbed the condensation on his Bud bottle, and even though the patio was wide open, a pack of cougars drug chairs over by our table, chair to chair, and practically sat in his lap. He was oblivious, it was evident that this was driving them crazy.

The cougars' attention was diverted by Super Fly who came over to say, ''Excuse me ladies, you don't remember me, but I remember you. We met at that house party...'' Smooth and classic, very impressive.

The fairly young female bartender outside had been swarmed with men the whole night. Wondering if she felt that the cougars might resent her for this, I went to chat her up. She was the owner's daughter and didn't want to comment on the situation, only saying that there were some ''very hot ladies here.'' She did explain that Thursdays are usually a bit more active, but there was a Cardinals game. Young men running around in tight white pants? Score.

The Verdict: If you try to come here to cougar watch, they will know your agenda. Cougars are dangerous. Meow!