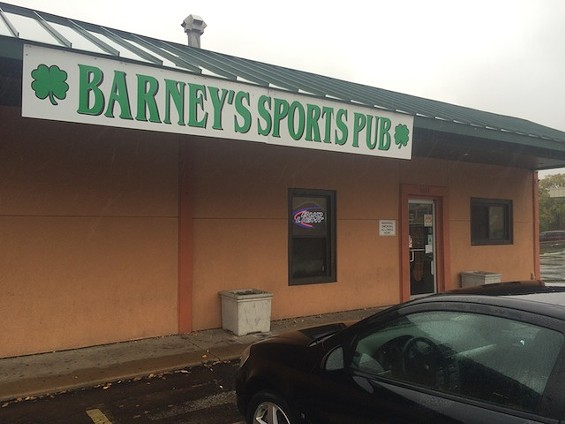 According to the We Are Darren Wilson Facebook group, which made the announcement yesterday, the T-shirts will be available Saturday for $20.

The red shirts with white lettering will say "GO CARDS" on the front, with the O replaced by a badge. The back will have Wilson's name above a small No. 6, which supposedly refers to, "I got your six," which is military slang for, "I've got your back."

Daily RFT reached out to Barney's staff and to the guy who inspired the shirt by taping an "I am Darren Wilson" sign to his Cardinals jersey before Game 4 of the NLDS. Both declined interviews.

A couple weeks following Michael Brown's death, Darren Wilson supporters gathered in front of Barney's, which also featured a sign claiming support for the officer. Owner Mark Rodebaugh, a 21-year veteran of the the St. Louis Metropolitan Police Department, told the Associated Press that he put up the sign and hosted the event because he felt Wilson's name was being "dragged through the mud."

"We've got a hard job to do," Rodebaugh told the AP. "We want people to know they shouldn't give up on law enforcement."

There has been a mix of reaction to the T-shirts on social media. One person commented on the post announcing the sale: "I'm a Cards fan through and through but this just looks awful to everyone else in the country guys...let politics and baseball be separate, as they should always be."

Some people on Twitter have called for boycotts of the smokey bar on Chippewa Street:

Others are saying the No. 6 on the jersey represents the number of times Wilson shot the unarmed teenager Michael Brown.

Tweeters claim "6" is for "I've got your back/I've got your six." Wilson supporters told me it referred to shots. I missed the joke, I guess