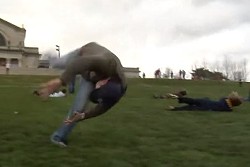 Who's ready for a barrel o' fun on Art Hill?
Last November, the Barrel Roll Man -- a group that goes around the world doing somersaults for charity -- attempted to set a world record for somersaulting on Art Hill. They failed.

This Saturday at 2 pm, they're trying again.

The existing record for group somersaulting was set almost exactly a year ago today, when 835 kids and parents went a-tumbling in Zurich, Switzerland.

Then Barrel Roll Man tried to one-up the Europeans on Art Hill last November, but they drew only 100 people (bwomp bwomp!). On Saturday, they're giving it another shot.

Here's how it works:

You donate $2 to be a part of the event. The proceeds go to Nurses for Newborns.

One other thing: You only have to somersault once to have it "count" for the record. You do not need to go rolling down Art Hill like a drunken fool (but you could; nobody's going to stop you, especially when you're throwing up in the Grand Basin).