It's Christmas time here in the Gateway City, and in honor of this most wonderful time of the year, I've decided that this week's Card of the Week is going to be a little bit different.
See, this week, instead of featuring a player who recently won an award, or signed a big contract, or exposed himself to a television camera, I'm going to ask Santa Claus, or perhaps Cardinals GM John Mozeliak ("Santa Moze"), to bring me something.
Dear Santa Moze,

My name is Aaron Schafer. I am 28 years old and I have been very good this year. I haven't been fighting with my brother even though he wanted to watch Cops reruns the other day and I didn't. I have brushed my teeth every day, and my mom says that I have been very, very good too.

I got good grades in school, and even took my teacher a plate of cookies my mom made. She said my teacher isn't mean she just wants me to pay attention and do better.

So I have held up my end of the bargain, Santa Moze, and now it's time for you to do your part. Please bring me a shortstop with some pop in his bat, a manager who isn't crazy, and a top of the rotation quality starter, preferably one who doesn't require a four or five year deal. I also want a light up Voltron and cash.

Thank you in advance for all the presents.

Well, you know what? It's been almost two weeks since I sent off the original copy of that letter, and all I got back from the Cardinals' front office was a damn form letter, something about ceasing and desisting. Well, to hell with them. I'll get the message to Santa Moze on my own. 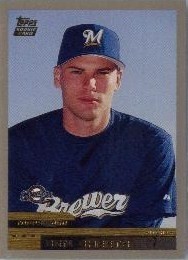 What we have here is a Ben Sheets rookie card, circa 2000, by the Topps Company. Got it, Santa? That's S-H-E-E-T-S. Sheets. Kay?
See, in my ever so humble opinion, Ben Sheets has got to be the best option on the market right now for the Cardinals to net a truly substantial upgrade over 2008's team. I know, I know, the Cards seem set on a closer, but I just don't think that Brian Fuentes is going to make that much of a difference over a Chris Perez-Jason Motte combo in the ninth inning. On the other hand, 180 innings or so of Ben Sheets instead of Joel Pineiro could very well be a big, big boost for the Cardinals in '09.
Okay, okay. I made my point before. I got it. I'll let it go now. No more complaining about how dumb it is for the front office to be going full-bore after Fuentes when there are better options on the market to upgrade the team. Promise. I'll just leave it in the capable hands of Santa Moze now. C'mon, Santa. All my friends said that you were fake, but I always believed in you. Even when they said you weren't a real GM, that you were just a general manager team ownership made up so that they would have somebody to tell the fans something whenever they were too cheap to pay for a free agent, I believed in you.
I will say, though, that last year really tested my faith in you, Santa Moze. See, I asked for some stability for the starting rotation for 2008, and you brought me a two-year contract extension for Joel Pineiro. I won't lie. That one hurt. I know he's durable, but remember, consistency is only a virtue if you don't suck.
So don't let me down again this year, Santa. Bring me something good. Not an overpriced closer that will marginally upgrade the bullpen for twenty two times the salary. Not another back of the rotation innings eater that I'll just end up having to take back anyway. I want a real live good pitcher this year. Hey, I've already done all the leg work for you on Sheets; I already know what I want. Now all you have to do is go and make it happen.
As always, any Card of the Week submissions should be sent to me at [email protected]. Thanks, everybody.