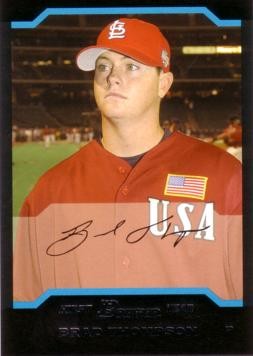 Time for plan C.
Plan B, of course, was implemented when Chris Carpenter became injured with an oblique strain; we saw P.J. Walters get a start, and Mitchell Boggs is next in line to try and eat some innings in Carp's stead.
Now, even though the Cardinals got good news, apparently, on Kyle Lohse's knee, you have to think that the plan is to skip his next turn, or at least push it back. Well, actually, I suppose you don't technically have to assume that, but it would seem to be the most prudent course of action.
Which brings us, once again, back to plan C. And plan C, as it seems to have been for pretty much ever, is Brad Thompson. So Brad, in honor of your faithful service, in one of the most thankless roles in all of baseball, here is your Card of the Week.
This is a 2004 Brad Thompson card from Bowman, from their Draft Picks series.

Ever since arriving in the big leagues back in 2005, Thompson has been the guy who gets all the shit jobs:

- He throws mop-up duty in blowouts.
- He comes in in close games, expected to get a double play ball to bail some other schmo out.
- He takes the hill to start whenever somebody gets hurt.

Thompson does it all, and he never complains. Sort of an oddly blue-collar job for someone playing professional sports, don't you think?
That's the good about Thompson. The bad, well, the bad is that Brad Thompson just isn't all that great of a pitcher. It's not that he doesn't have some talent -- he did have that scoreless innings streak in the minors, after all -- but he doesn't have the raw stuff to dominate at the major league level and put his stamp on a permanent, fixed spot.
So here's to hoping that Lohse isn't out for very long, and that Thompson can at least hold the fort down once, or maybe twice, and give the Cards a chance to keep winning. Even as well as they've started the season off, the Carrds certainly can't afford to let up.
But even if Thompson doesn't end up having to make a start at all, he still deserves our respect. Many is the time he's saved the bullpen by soaking up some much-needed innings, and for that alone, he deserves that respect, and maybe just a little bit of thanks, too.