Today, we finish up our cardboard tour of the 2008 Award Winners with the American League Most Valuable Player. We had a Pujols card a while back, so rather than duplicate Albert, I thought we'd go with the mouse that roars, Dustin Pedroia. 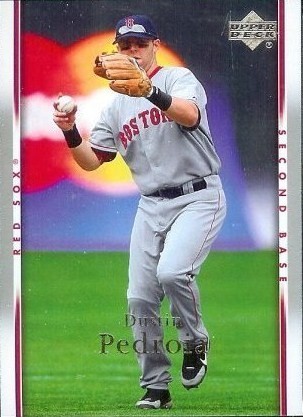 This particular depiction of the Boston second baseman and newly crowned MVP is brought to us by Upper Deck, from the 2007 season.

A case could certainly have been made for a couple of other players in the American League this year, with Alex Rodriguez putting up yet another year of huge numbers and even huger boos. Grady Sizemore had perhaps the quietest 30/30 season (30 home runs, 30 stolen bases), you're ever going to see for an awful Cleveland team. Still, Pedroia was stunning this season, and he deserves the award.

On a side note, if A-Rod had managed to somehow score Madonna circa 1995, I think I would have had to give him the nod. Unfortunately, he scored the 2008 version of Madonna, which, to be perfectly honest, just isn't MVP material. Sorry, Alex. Maybe next year, huh? You should try to see if you can pry Jessica Simpson out of Tony Romo's grip. And considering Tony's fumbling problems, that's a grip Jessica should to be able to slip.

But anyway, back to the subject at hand. Do you know that the Cardinals passed over Mr. Pedroia twice in the 2004 draft? Yup. Sucks, doesn't it? The thing is, the Cardinals really had every reason in the world to take a guy like this. The system was already brutally thin on middle infielders, a malaise that persists to the present day. It's not even like he was a toolsy high schooler. College kid, just like the Cards like. Short, white, and hustly, too, just like the Cards like. Oy. I know, I should really let it go, but it just hurts me so badly every time I think of it. Instead of Dustin, the Cardinals took the infamous Chris Lambert, he that brought us three months of the Mike Maroth show, and Mike Ferris, a first baseman out of Miami, Ohio. Ferris was released late last season after making it to Double A ball, I believe. I've said it before and I'll say it again: that's a bad day right there.

Pedroia is, quite frankly, a hell of a ballplayer. He's got a little bit of speed, solid power (especially for a middle infielder), he could hit .300 in his sleep, and his defense is a plus. In short, this is exactly the kind of player you want anchoring the middle of your infield.

Congratulations, Mr. Pedroia. And congratulations to the Red Sox. I'd give up just about anything for a guy like this for the Cardinals.

As always, any submissions for Card of the Week should be sent to [email protected].