Baseball Card of the Week: John Tudor in 1987

Howdy, folks. Friday is upon us yet again, and that means, as always, a Baseball Card of the Week. I actually have a bit of a double whammy for everybody this week, so strap yourselves in.

First off, I've got a card that I had been planning on getting to or quite a while now, because I really, really like it, and I just hadn't had the chance. Today's card comes to us courtesy of Mr. Tom Carlson, the senior art director here at the RFT. He sent me a big packet of cards some time ago, including a Lee Smith that I used immediately. Included in the packet were a couple of other gems that I hadn't gotten to yet; I receive quality submissions pretty much every week, so it's tough to really just keep pulling from one person when I have other good stuff to use. 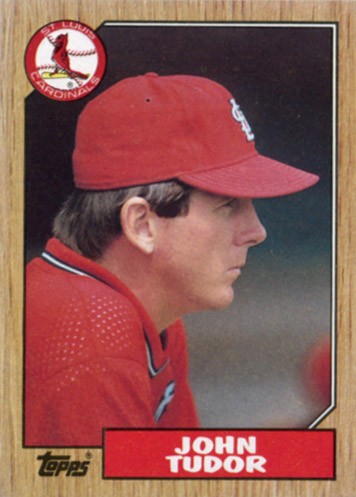 This week's card is a 1987 John Tudor card from Topps. Personally, I'm a big fan of the whole wood-grained border on the 86's; there's really nothing that screams "class" like fake wood, is there? I have a first-year Barry Bonds card floating around somewhere from this same series; one of these days I'm going to remember to dig it out and put it up on here.

As for the player, John Tudor was one of my very favorite pitchers growing up. I believe I've mentioned before in these pages that I learned the game of baseball watching it on television with my grandfather; we would break down a pitcher's delivery, his thought process, everything, pitch by pitch. Tudor was, for us, the ultimate pitcher.

He had some funk to his delivery, which was always fun to watch, he was left-handed, and he was good. But what was really great about Tudor was the how of his being good. He never topped about 85 mph or so, yet consistently had success against major league hitters. He had impeccable control, for one thing, and was an outstanding strategist, for another.

More than anything, though, the man had balls. Tudor was never afraid to challenge a hitter with his mid 80s heater when he needed to, and more often than not, the batter found himself making that turn back toward the dugout. Everything you needed to know about how to pitch you could glean from just one John Tudor start.

The other thing I have for you today is something else memorabilia related. One of our astute readers sent in a link about an investment firm putting together a portfolio based almost entirely on baseball collectibles. The company is called Baseball in the Attic, and they specialize in memorabilia-based investing. Personally, I actually wasn't aware that such a thing existed, and just thought it was really kind of cool.

In addition to offering investment portfolios to people, the company is also always looking to add to their collection, buying baseball cards and related memorabilia. If you just happen to have a big attic full of old cards and stuff, you might consider dropping them a line. I haven't personally dealt with them, so please don't construe this as an endorsement, but it's definitely the sort of thing that gets your attention.

As always, please email any submissions to me at [email protected]. Thanks to both Mr. Carlson for the card, and to the reader who sent me the info on the Baseball in the Attic site. And thanks also to everyone who has sent me these things all summer long. I have a tremendous backlog, as a matter of fact, of cards that people have sent over as part of a big packet. I keep meaning to go back and use more of them; I promise I'll try to eventually.