Baseball Card of the Week: Larry Walker with the Expos

I've received a ton of great submissions the last couple of weeks, and I promise I'll try to get to more of them, but I just couldn't resist tracking down this card. It comes to us from Broken Bat Baseball Cards, a great baseball card themed blog that features cards (as the name implies) involving broken bats. If you're any kind of card fan at all, you should really visit the site. Very cool place. 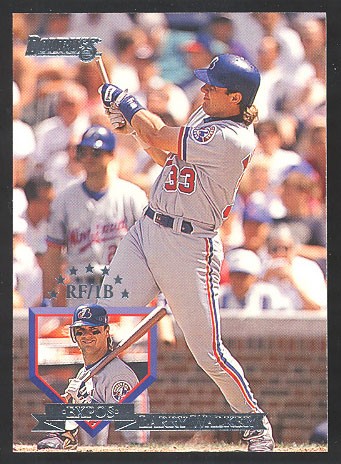 This particular card is a 1994 Larry Walker card by Donruss. Larry was still an Expo at the time, as well as still having his wicked cool mullet. Jason LaRue, eat your heart out.

Completely unrelated note: my mother had a crush on Larry Walker when he played for the Cardinals. She's always had a thing for biker type guys. It's more than a little bit disturbing, to tell you the truth.

In 1994 Walker was playing his last year with the Montreal club he came up with, and had one of his best professional seasons. He posted a .322/.394/.587 line in the strike-shortened season, playing in 103 games. Unfortunately, the 1994 season was an abbreviated one due to the lock out that saw the World Series cancelled. It's a shame, too, as the '94 Expos were one of the best teams in recent memory. They ran away with their division, building a double digit lead before the season even hit the 100 game mark. Then, of course, came the labor stoppage, and it was all lost.

The next season, in 1995, Walker found himself in Colorado with the new Rockies franchise. He had his best years in the thin air of Denver, putting up Hall of Fame type numbers. Personally, I kind of doubt he gets to the Hall, but it's tough to argue with the numbers he put up. He remained with the Rockies until the 2004 season, when the Cardinals swung a deal for him at the deadline. I remember the day the Cards got Walker, watching him cry as he contemplated leaving the team, and fans, that he had known for so many years.

One of my favorites from his time here in St. Louis, Walker hung up his spikes after the 2005 season, as his ailing back wouldn't allow him to play any longer. He's served as a roving instructor for the Cardinals the last couple of years in spring training, and I hope that after he's had enough of being the stay-at-home family type, he'll be back in a Cardinal uni again. Personally, I think he'd make a great bench coach.

Thanks to everybody who continues to send in their submissions. As always, please send any submissions to me at [email protected]. Thanks.