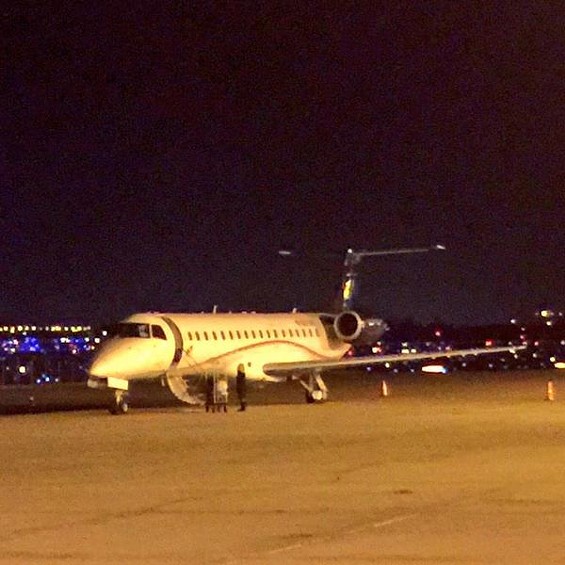 Gregg Ellis via Twitter
The plane that made an emergency landing in St. Louis while flying the Mississippi State men's basketball team home from Columbia.

The Mississippi State men's basketball team survived an emergency plane landing in St. Louis only to discover what everyone here already knows: Trying to get a hotel room during Mardi Gras is hella expensive.

The team was on its way home from Columbia, where it beat the Missouri Tigers 77-74, when one of the engines of its Embraer 145 twin-engine jet stopped working. Players broke into applause as the plane made an emergency landing in St. Louis.

When a back-up plane from Kentucky had to stay grounded due to strong winds, team leaders considered getting hotel rooms in St. Louis before driving home to Mississippi Sunday morning -- until, that is, they realized how expensive that would be. Gregg Ellis, the team's sports information director, admitted on Twitter that the spike in hotel rates for Mardi Gras weekend came as a surprise:

The latest ... Strong winds have kept the plane in KY from taking off. And apparently rooms are at a premium in STL due to Mardi Gras. Huh?

Even as the team fled price hikes in St. Louis, home of America's second-largest Mardi Gras celebrations, Ellis paused for a moment to appreciate the beauty River City has to offer.

Hey, its the Arch. Sightseeing at midnight. Awesome.

The team had to drive an hour south -- to Festus, that jewel of Jefferson County hoosier hospitality -- to find a reasonably-priced room.

No it doesn't, but we get your point, Ellis. The team managed to drive back home Sunday, but not without graduate assistant coach Tanner Smith heroically tweeting embarrassing photos of the players sleeping along the way.