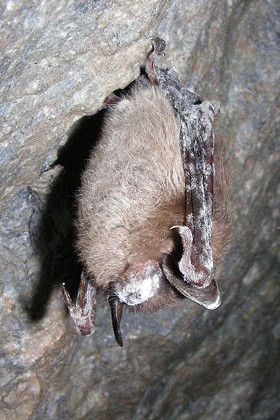 It's not lethal to humans, but here's what it does to bats, according to the Missouri Department of Conservation:

[it] causes infected bats to awaken more often during their winter hibernation and fly outside in search of insects to eat. This activity uses up stored fat reserves needed to get them through the winter, and they usually freeze or starve to death.

This is a big deal because the Show-Me state's 775,000 gray bats alone eat more than 223 billion moths, beetles and mosquitoes a year. This equals about 540 tons. If not preyed on by bats, the pests could cause forest and agricultural damage.
A Post-Dispatch story today says 80 bat-colony caves sitting on land under MDC jurisdiction will be closing. The Department of Natural Resources is still deciding what to do with its own caves. Scientists suspect that humans inadvertently spread the disease.

But what will such closures really accomplish? The state has 6,300 caves, about three-quarters of them privately owned, says the MDC. So if none of those landowners close their caves, the state is in effect sticking a small band-aid on a gaping wound. Perhaps that's better than nothing, but one thing is certain: things don't look good for our bats.