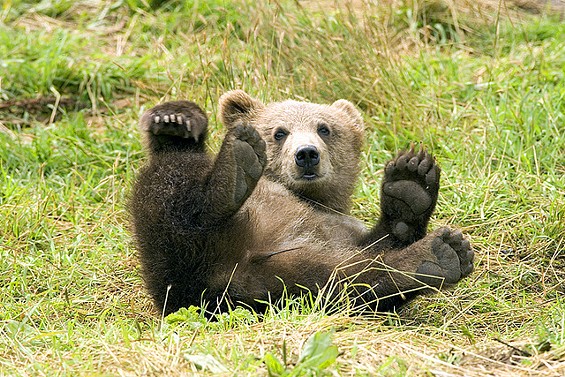 Steve Hillebrand via Flickr
A bear cub will be euthanized after a rabies scare at Washington University in St. Louis.

Boo Boo, a two-month-old bear cub, will be euthanized and tested for rabies after nibbling on the fingers of fourteen Washington University students at a petting zoo.

Cindy's Zoo, a petting zoo based in Moscow Mills, brought the bear to the university as part of an annual petting zoo designed as a stress reliever for students before finals. The bear was a special treat for the school, whose mascot is a bear, and students took photos of themselves cuddling, petting and even walking the bear on a leash.

Update: According to the latest from the Post-Dispatch, Boo Boo is safe. LONG LIVE BOO BOO THE BEAR. In case you missed it, click through for the whole tale.

"The Missouri Department of Conservation has traced the bear's whereabouts enough to the point they don't think he has rabies and they don't have to kill the bear," said Pat Washington, a spokesman for St. Louis County Executive Charlie Dooley, to the Post-Dispatch.

Because the bear was born in the wild, state and local health officials cannot rule out the possibility that it carries rabies, the university said in a statement to the media.

"The only way to confirm is to test the bear cub following euthanasia," Washington University spokeswoman Susan Killenberg McGinn says in the statement. "This is an extremely unfortunate situation, for our students and the bear cub."

Results should be known in 48 hours, the university says. If the bear tests positive, students will receive rabies vaccinations.

University officials had no idea Cindy Farmer, the owner of Cindy's Zoo, was bringing a bear cub born in the wild to the petting zoo along with the typical goats and pigs, according to the statement. Farmer voluntarily surrendered the cub for testing.

Congress of the South 40, the group that organized the event, tells Daily RFT it is not giving any statements at this time.

Students were outraged to hear the bear would be put down and took to social media to criticize the school:

Washington University Is Euthanizing a bear cub THEY brought on campus for biting student that tried to pet it....enough is enough

WOW Washington University really fucked this one up. Brings bear cub on campus for student fun. Bear nips a student. Now they're killing it.

@WUSTL will never live past its reputation of killing its own mascot, the bear, a baby bear no less.#savethebear @peta we need your help!

"I don't think the bear should have been brought to campus in the first place," student Raja Krishna, 21, of Cleveland, tells the St. Louis Post-Dispatch. "This event was both misguided and subsequently mishandled. For the entertainment of a few students, a bear cub had to die, and I think this is just ridiculous."

The United States Department of Agriculture Animal and Plant Health Inspection Service has sent Cindy's Zoo several official warnings for violations of federal regulations. Warnings from 2012 and 2013 say the petting zoo did not provide adequate veterinary care to control, diagnose and treat diseases.

"The Missouri Department of Conservation has traced the bear's whereabouts enough to the point they don't think he has rabies and they don't have to kill the bear," said Pat Washington, a spokesman for St. Louis County Executive Charlie Dooley.

As a result, the 18 students who said they were nipped by the bear will not have to be tested for rabies, said a university spokesman.

"We are very pleased that this unfortunate situation has come to the best possible conclusion for everyone involved -- our students, our community, and the bear cub," said spokesman Susan Killenberg McGinn.

But the owner of the petting zoo is not off the hook....

"We are looking into this," said USDA spokeswoman Tanya Espinosa.