Because There's No News to Report in Kansas City, Royals Blogger Makes Some Up 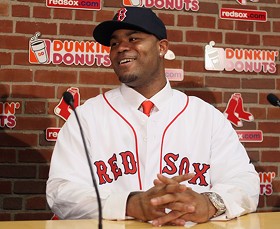 image via
You can't tell, but there's a passage from Of Plymouth Plantation under the brim of Crawford's cap.

This is, to put it kindly, not an especially exciting time of year to be a journalist. Especially if you cover baseball. So naturally, it's the perfect time for Kansas City Royals blogger Will McDonald to indulge a little fantasy: that former Tampa Bay Rays outfielder Carl Crawford, recently signed by the Boston Red Sox for $142 million, plans to honor his new city and his longstanding love of colonial literature by using some of his astronomical new salary to open an antiquarian bookstore.

McDonald reported on the blog Royals Review that Crawford and his real estate agent were scouting the Boston area for possible locations.

Crawford was no fair-weather fan of the Puritans, McDonald reported.

Crawford's passion for New England history began at Jefferson Davis High School in Houston when he read William Bradford's Of Plymouth Plantation in the 9th grade. "At Jeff Davis at that time, it was very much the old Bercovitch reading of history that dominated. To prepare, I'd read The Puritan Origins of the American Self in eighth grade. Eventually however, I wanted to return to the primary materials."

A multi-sport star in high school, Crawford taped a passage from the first page of Plymouth Plantation to the inside of his helmet.

"Ah yes, I still remember it. 'Some times by bloody death and cruell torments; other whiles imprisonments, banishments, & other hard usages; as being loath his kingdom should goe downe, the trueth prevaile, and ye churches of God revert to their anciente puritie, and recover their primative order, libertie, & bewtie.'"

McDonald's account includes an interview with Crawford, who was "dressed in a heavy fisherman's sweater and clutching a newly purchased diary of 1655 Connecticut Governor Thomas Welles". Playing for the Red Sox was a dream come true, Crawford said, because of the bookish spirit in the air of New England, much stronger than that of Tampa. He was already planning a visit to the Special Collections Reading Room at Harvard's Houghton Library with his new teammate Kevin Youkilis, a personal book appraiser and a checkbook.

That should have been enough to warn close readers that something was not quite right, but this is a time of year to believe in miracles and Red Sox fans are more likely to believe than most. And so bookish Red Sox fans with Twitter accounts read McDonald's post and went wild, including the Harvard Bookstore, which Tweeted "File this under 'amazing.'" (It even got its own hashtag!)

Alas, Crawford's antiquarian bookstore was not to be. McDonald confessed to the LA Times' book blogger Carolyn Kellogg that the whole thing was a hoax. "It was intended to be a joke," he wrote in an e-mail to Kellogg, "though I wish it was true."

Ian Crouch of The New Yorker writes that he first suspected something was off when Crawford referred to "Plymouth" instead of the more antiquarian "Plimoth." And his suspicions only grew when he saw that Crawford had told EPSN.com, "I haven't read a book in forever."

Still, Crawford raised hopes yet again by Tweeting the night the news of the hoax broke:

And then dashed them again a few days later:

Yeah, looks like he's getting the hang of being part of the Red Sox franchise.