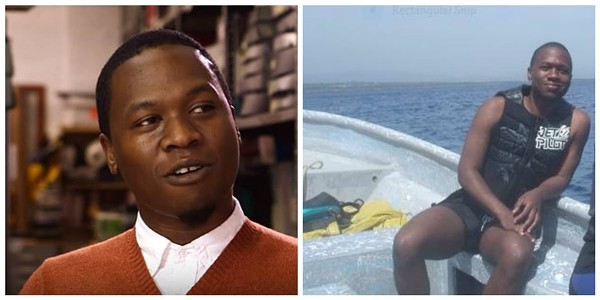 Juan Thompson, right, in his Twitter photo and left, courtesy of Bric TV.
In the days before Juan Thompson's arrest this morning for his part in a string of bomb threats to Jewish Community Centers across the U.S., the St. Louis native seemed a little extra crazy, which is saying something.

This is a guy who took imaginary trips to Cuba and Senegal. He dubiously claimed he was with the Standing Rock protesters in North Dakota and that he'd bought a house in Detroit. He lied about the weirdest things.

"My homemade kombucha and homemade kimchi both finished today," Thompson tweeted in December with a picture of his handiwork. "I sound like a snob. But kimchi is sooooooo good. So fucking good."

It took a 20-second Google search to figure out that Thompson had stolen the picture from a blogger. 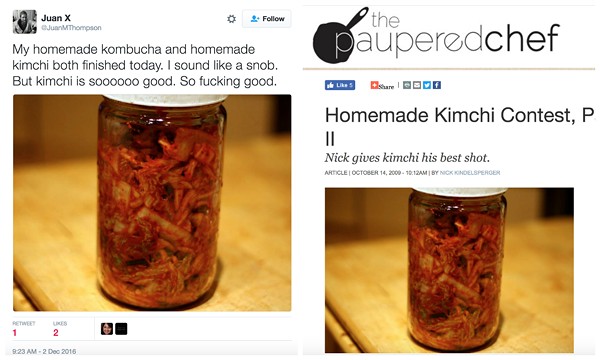 Tracking Thompson's firehose spray of social media posts in recent months was always an exercise in "what the fuck?" But today's news that the FBI believes he was behind a string of bomb threats to JCCs and the Anti-Defamation League was still unsettling.

The threats were a convoluted revenge scheme, meant to frame an ex-girlfriend in New York City, according to the federal complaint. The FBI says Thompson, 31, called in at least eight bogus threats. Sometimes, he warned law enforcement that the ex-girlfriend was making the calls, authorities say. Other times, he called them in under his own name, and then later claimed she had been trying to frame him, the complaint alleges.

The events laid out in the complaint by federal prosecutors sounded weird and crazy — and uncomfortably familiar.

At the Riverfront Times, we published a cover story about Thompson last February. He was a north St. Louis native who was once a reporter with a job at The Intercept in New York City, a news site best-known for its cache of documents from national security leaker Edward Snowden. But Thompson had been fired after the site caught him making up details and sending bogus emails, including some masquerading as the site's editor.

Thompson blamed racism and also claimed to have cancer. But we uncovered additional problems with his work, going all the way back to his college days with the student newspaper at Vassar College, a prestigious university in Poughkeepsie, New York. Thompson had overcome an impoverished background to attend college there, but failed to graduate. He still landed a few good media jobs — only to crash and burn when his sourcing didn't check out.

After our cover story, we followed up later with a short account of his brief tenure for an online news site. I wrote the stories. Thompson was pissed. He emailed my boss and tried to get me fired. When that didn't work, he emailed me.

"You are a white piece of shit who lies and distorts to fit a narrative," he wrote me in October. "Thankfully no one reads you or the rft and you will spend the rest of your career aggregating stories about shootings."

Things were quiet for a while after that, but then came the fake Twitter accounts. My wife and I were sitting on our couch one night when she tapped me on the elbow and showed me her phone. Someone had created a brand-new Twitter profile claiming I was a rapist. The person tweeted at her, my boss and other journalists around St. Louis. It was an insane — and, though it's hard to believe I even have to say it — completely untrue accusation.

For the next several days, we scrambled to get people at Twitter to pull down the account. They finally did. Then another popped up. We got it pulled down. Another popped up. This went on for weeks, account after account, day after day, and extended to Facebook. Someone created fake Facebook accounts and pages and regularly popped up on RFT stories, accusing me of rape. This person also made reference to my mother, using her first name, and published a social media profile picture of my wife that had been scraped from the internet.

We finally contacted the St. Louis police department's cyber crimes unit. I still remember the detective stopping me before I could get the full explanation out.

"Does this have anything to do with Juan Thompson?" he asked.

I had not even said Thompson's name yet. I didn't want to accuse him prematurely, although the fake accounts and the penchant for revenge had me fully convinced it was him.

It turns out police were already investigating complaints Thompson had been harassing his ex-girlfriend in New York. They couldn't tell me much about her case, but the pattern of weird cyberattacks was the same. I called one of Thompson's old roommates, whom I had quoted in an earlier story. He too was under attack. Someone was sending anonymous messages to his employer and and graduate school, claiming he was a racist.

All of it was garbage, but here's an ugly secret about this kind of thing: There isn't a whole hell of a lot you can do. Police told me I had, at best, a pretty weak harassment case. And I think they were right. He had not threatened to physically harm me. It was also hard to prove it was even him.

To their credit, St. Louis Police sent requests to Twitter and Facebook for IP addresses linked to the accounts, but the companies wouldn't cooperate. A phone number used to text me harassing messages was routed through a Canadian company, and they weren't giving up the account information.

All we could do was watch what Thompson was doing online, try to link it to the attacks on me and my family and brace ourselves for the next hit.

Watching Thompson's Twitter account on a regular basis makes for a strange pastime. After the kimchi incident, I was particularly interested any time he posted a picture. His supposed trip to Cuba was a good one. He posted a picture of his new Malcolm X tattoo. I searched "Malcom X tattoo" in Google images, scrolled down and found the image. He had simply reversed it. Same with scenes from his balcony of the Havana skyline at night.

If you believed his posts, he was jet-setting across the world. He was also railing against capitalism, white women, police, liberals, Trump and so many others. Lots of the posts were just weird — until it was pulled down this morning, you could see the 10-point plan on a "Thompson for Mayor" GoFundMe page — but it often turned nasty.

In the past week, a Twitter account that seemed to be created solely to retweet Thompson's main account started tweeting a link to what was basically a fan fiction story — about Thompson. The writer claimed to have had a crush on Thompson since high school, but was angry when he chose a white woman over her.

"I was a popular girl and could've had any boy in school I wanted, but I wanted him," the supposedly jilted writer said. "He was dark, in skin and spirit, and smarter than anybody I knew. He was a nerd but knowledgeable and driven and worldly from all the old movies he watched."
click to enlarge 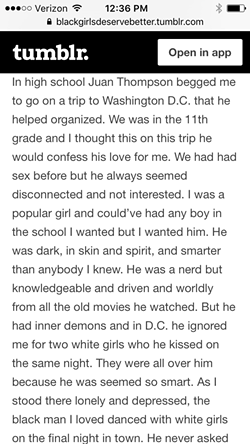 Our protagonist in the story then names a woman she says is Juan's ex-girlfriend and smears her as a racist "fetishist" who was spreading herpes across the land.

The writer claims she was taking revenge on Thompson and had worked with a new lover, who happened to be a white guy with IT skills, to hack Thompson's account and terrorize him and the girlfriend:

"Me and the white boy fucked with all of them for a while: sent messages, putting their names on racists 8ch and doxxxing them, calling and reporting jobs, messaging friends and family, tipping stories."

The story seemed to have multiple goals: to stroke Thompson's ego, to cover any cyber misdeeds with a bizarre account of hacking, and to slime the ex-girlfriend.

It was strange, over the top and kind of funny in a gallows-humor sort of way, but it also made me realize that whatever Thompson seemed to be doing to me, it was probably way worse for his ex.

It also seemed to represent a turn for the worse. Thompson was posting attacks against the woman on his own Twitter page, claiming she was sending bomb threats in his name and trying to get him "raped in jail." He even tweeted accusations to the Secret Service Twitter account.

The speed and vitriol seemed to be increasing, and I wondered what was going to happen. But I was still learning things that were just plain strange.

On February 23, he emailed St. Louis barbecue favorite Salt + Smoke and claimed to be a freelancer coming to St. Louis to write a food piece for the New York Times.

"I've been told your place has the best bbq in the city," he wrote from a gmail account he'd used before. "I wanted to ask if I could come in on Monday, around 7, for dinner? If the food is good, you get a great write up in the Times!"

When the restaurant's owner told him to feel free to drop by, he followed up with another email, claiming he'd somehow lost his wallet "along the way to JFK airport and STL."

"Could Salt and Smoke comp me tmrw, if I don't find it, and I'll reimburse?" he asked. Out of due diligence, Salt + Smoke confirmed with the Times that Thompson was not in fact on assignment for them. Once again, Juan Thompson was simply making stuff up.

I was still considering the weirdness of it all when I learned this morning he had been arrested. Seems he wasn't in Cuba, Senegal or Detroit.

I dropped by his mom's house in north city on my way to the office. Nobody there really wanted to talk to me, but Thompson's stepdad chatted for a few minutes on the front porch. The FBI had stormed the place about 7 a.m., he said. They pushed open the door, confiscated various family members' cell phones and searched the house.

The stepdad told me that Thompson wasn't staying there; agents had picked him up at his grandmother's house. The others only saw him about once a month. The stepdad said he tried to stay out of Thompson's business when he did see him.

I told him about the charges and the fake restaurant reviews. He chuckled and shook his head when I mentioned a recent post about a loft apartment Thompson claimed he was renting downtown.

"When he came back from New York, he wasn't right," the stepdad said. "He wasn't that way when he left."