Update below with new information on the photo: There's a lot of gross, creepy stuff on Craigslist, but this may be one of the worst things we've seen on the site in a long time.

Posted a few days ago in the St. Louis "rants and raves" section, the short, now-flagged post is titled "Keeping the peace (Belleville)." The text says "5:30 in the morning is not the time to hear your dog barking. A good dog is a quiet dog."

Above the text, the post includes a very graphic, very real-looking photo of a bloodied-up, apparently deceased dog. And now, animal-rights advocates are trying to track down who might have posted this -- and whose missing pet may have been murdered.

The post -- which first made the rounds on the Facebook page of Hope Animal Rescues, a Metro East group -- was flagged and removed yesterday.

An animal-rights advocate and follower of Hope Rescues sent Daily RFT this screenshot here. We've cropped out the most gruesome part of the photo (but have included the unedited version on the next page): 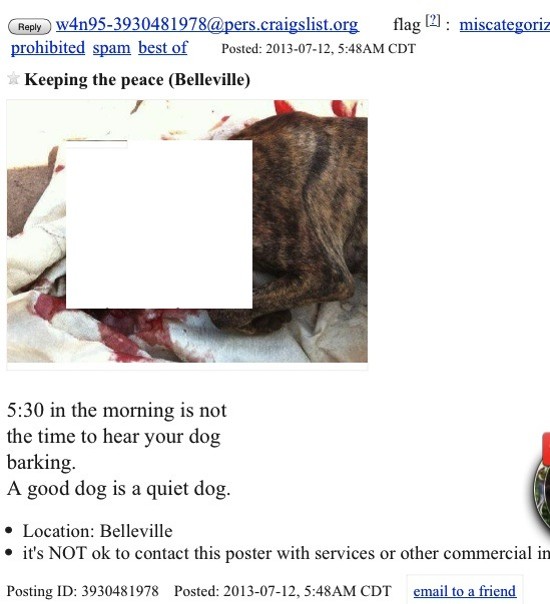 "I have to go on the assumption that this is a real photo, and this is somebody's dog," Jackie Spiker, cofounder of Hope Rescues, tells Daily RFT.

She says that multiple people have now filed complaints with the Belleville Police Department in hopes that officers may be able to track the IP address of the poster. Other volunteers are searching recent missing dog ads to see if they can find a match.

Based on her extensive experience with animal cruelty cases, Spiker says the photo looks legitimate and not Photoshopped.

"I have to do my due diligence," she says.

Spiker spent time searching to see if this was just a horrible stock image online of a murdered dog, but couldn't find anything.

She says the dog appears to be a brindle boxer mix with a red collar on.

"I don't know if the dog was found hit on the side of the road. Anything could've happened," she says. "My concern is this is somebody's dog."

Spiker says this case serves an important reminder that it's never a good idea to leave your dog chained up outside.

UPDATE, 11:12: a.m. Daily RFT did a reverse image search on the dog and found this (warning: graphic photo) 2011 article from a newspaper called NT News, apparently an Australian outlet. It's clearly the same photo, which means this local Craigslist ad is some sort of fake. Still very creepy, though!

Continue for the unedited screenshot of the disturbing Craigslist post.