Bernie Sanders Supporters Will March in St. Louis — and 52 Other Cities — July 24 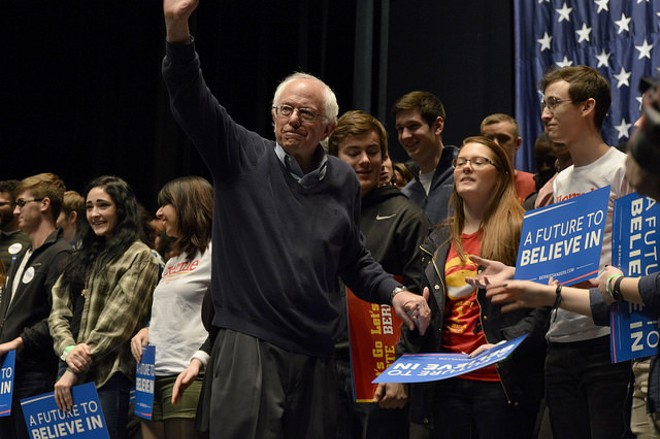 Photo courtesy of Flickr/Alex Hanson
Bernie Sanders: Vanquished as a candidate, he hopes the revolution continues.
The Democratic Party presidential primary may be over, but the "Berniecrats" are not — the progressives who rallied around the candidacy of Senator Bernie Sanders plan to march in St. Louis and 52 other U.S. cities on Sunday, July 24.

And you're welcome to join them beginning at 11 a.m. at St. Louis City Hall (1200 Market Street). Their goal? To build a revolution, naturally.

Melanie Thompson, a volunteer for the Sanders campaign, says she first started working to organize the march in June. But when it became clear Sanders would be halting his candidacy, the emphasis changed. The march will still pay homage to Sanders, but instead of focusing on the Democratic National Convention, she says, "We're going to work on getting other Berniecrats into office."

In St. Louis city and county, she says, 25 progressive candidates are on the ballot this fall. At least fifteen are committed to being at the rally Sunday.

"We're going to be stressing these local races can affect you more than even state or national races," she says. "It's the idea that you need to get involved in your community — starting at the committee level."

The rally is also meant as a call for unity, but that's less a show of support for Sanders' onetime foe (and the victorious Democratic Party nominee) Hillary Clinton and more about progressive values in a fraught time. Thompson suggests that Clinton still has a ways to go before she can capture the hearts of the Berniecrats.

"I'm going to see if she steps up or is just giving lip service to the planks she's allowed Bernie Sanders to put into the platform," she says.

But that doesn't mean she's ready to switch to the other side: "I'm not gonna vote Trump."

Editor's note: A previous version of this story provided the wrong date for the march. It's happening Sunday, July 24. We regret the error.