Big Night for 'Flip the Board' Candidates in St. Louis Aldermen Races 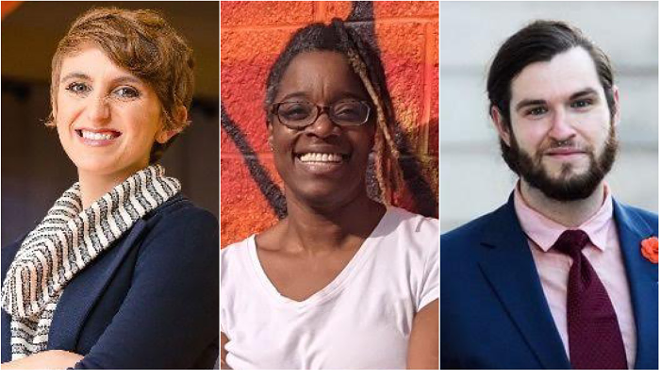 TWITTER
From Left: Ann Schweitzer, Tina "Sweet-T" Pihl and Bill Stephens all won seats on the Board of Aldermen, according to unofficial results.


In an upset-filled night, two of four progressive candidates working to "flip the board" in aldermanic races unseated incumbents, and a third filled a hotly contested open seat.

The results still need to be certified, and Pihl's apparent victory was tight. The unofficial count has the urban planner edging out Michelle Sherod by just nineteen votes, 1,151-1,132, to replace retiring Alderman Joe Roddy in a ward that includes swaths of the Central West End, Midtown and Botanical Heights neighborhood.

Roddy, often criticized from the left as too eager to shower developers with tax breaks, endorsed Sherod, whose political resume includes a stint as an aide to former Sen. Claire McCaskill.

The seat was a key piece in the "flip the board" strategy to install a progressive majority on the board. Progressives, led by 15th Ward Alderwoman Megan Green, backed Pihl, Schweitzer and Stephens along with Shedrick "Nato Caliph" Kelley, who challenged Alderman Jack Coatar in the 7th Ward.

Kelley pushed Coatar from the left and fell just 122 votes short, according to the unofficial results. The setback, however, was one of the few disappointments for progressives on Tuesday night. Stephens, a St. Louis Public Library employee, narrowly defeated Vicky Grass who had won a special election to replace ex-Alderman Larry Arnowitz, who pleaded guilty in federal court last year to fraud for siphoning funds from his campaign account.

Along with picking up seats, progressives held onto the ones they already had. Green dropped her predecessor Jennifer Florida by a margin of 67-33 percent in south city's 15th Ward, and 9th Ward Alderman Dan Guenther similarly won a rematch against Ken Ortmann, another longtime alderman who had been ousted during a previous progressive wave.

One of the intriguing upsets of the night was not specifically part of the "flip the board" strategy, but it will shake up the power structure on the board. James Page, executive director of the Downtown Neighborhood Association and a former Obama organizer, took out Alderwoman Tammika Hubbard in the 5th Ward.

Hubbard's family has long been political power brokers, and she and her father Rodney Hubbard Sr. are currently in a feud with a developer that alleges they're trying to squeeze them on a federal housing project in hopes of benefitting  the elder Hubbard's development corporation — allegations the Hubbards deny.

Page, a scooter-riding grandfather and prolific volunteer, finished with 52 percent of the vote, which translates to just 74 more votes than Tammika Hubbard. Heading into Election Day, he urged voters to "turn the page" on the 5th Ward.

Here's a ward-by-ward breakdown of Tuesday's Board of Aldermen results: