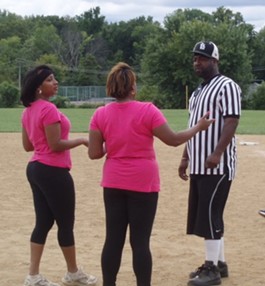 Image via
Sweetkixx Kickball Association kicks off their season in late May
BigBalls Kickball getting the boot from Tower Grove Park was the big news of the week but the tales (whether true or not) of drinking, nudity, peeing in public and more drinking weren't enough for 21st Ward Alderman Antonio French to keep an all-female kickball league from coming to Fairgrounds Park.

"I didn't know anything about the so-called BigBalls league," French said yesterday in a phone interview, a few hours after he welcomed the league to the north side via his Twitter feed. "But I don't imagine we'll have the same kind of behavior from these ladies, they'll probably keep the beer drinking to a minimum."

According to Marshiana Shaw, CEO of the Sweetkixx Kickball Association, the alderman has little to worry about when it comes to wild, off-the-field behavior.

"[BigBalls] is a beer league," Shaw says. "For us, it's a little bit of fun but we take it very, very seriously. It's a competitive sport."

Shaw says six teams have already joined here league and she's hoping to get ten and sponsorship from local businesses by the time the season kicks off at the end of May.

Shaw says she's been playing competitive kickball in two separate leagues and a variety of weekend tournaments since last year. She picked Fairgrounds Park for the Thursday-night games because she liked the atmosphere and was tired of seeing all-male softball leagues dominate the park on weeknights.

"The city gets a bad rap but Sunday when we were out there there were families and kids, men and women, it was good time," Shaw says. "We had a DJ, we barbecued, we celebrated. It was a good time. I thought it would be good to bring that element back to the city on a regular basis."

French says he's working with the Parks Department to renovate some of the park's fields (which are also used by non-profits organizations and Beaumont High School for baseball) and add Park Ranger and police patrols in the area.

"Anything we can do to make their experience as good as possible we will," French says. "Those are the kind of groups you want to feel comfortable using our parks."