Bill Maher: Michael Brown "Was Acting Like a Thug," But Wilson Is a "Plain Murderer" 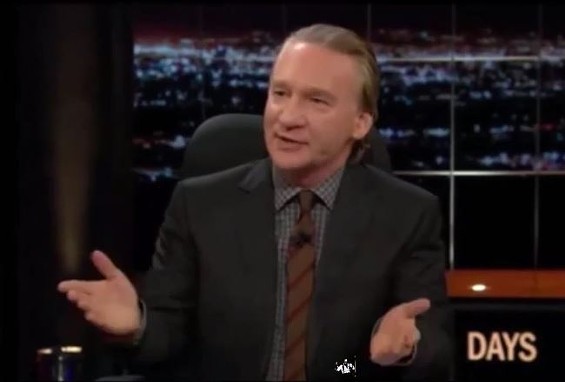 While a St. Louis grand jury deliberates indicting Ferguson police officer Darren Wilson, it seems like everybody else wants to have their say on the shooting death of Michael Brown.

The latest celebrity to weigh in is comedian and talk show host Bill Maher, known for not shying away from controversial opinions.

During his HBO show Real Time with Bill Maher, Maher angered Brown family supporters by implying that Brown was acting like a thug before his fatal encounter with Wilson.

"I'm sorry, but Michael Brown's people say he is a gentle giant," Maher says. "Well, we saw that video when he was in that 7-Eleven. No, he wasn't gentle. He was committing a robbery, and he pushed that guy. He was acting like a thug, not a gentle giant."

Surveillance camera footage shows Brown shoving a clerk and stealing a $50 box of Swisher Sweets cigars from a small convenience store just minutes before encountering Wilson. The video's release by Ferguson police during the same press conference where Chief Tom Jackson identified Wilson as Brown's shooter has been widely criticized.

Cornel West, the prominent civil-rights activist and author who was arrested while protesting in Ferguson, quickly came to Brown's defense.

"Michael Brown was a human being," West says emphatically. "He had flaws like all of us. He's a cracked vessel, but he didn't deserve to be shot and his body sit there for four hours. He deserves a fair trial."

Maher says that while Brown may have been "acting like a thug," he agrees with West that Brown "certainly didn't deserve to be shot for it."

Maher calls it "disturbing" that people are siding with Wilson, whom he calls a "plain murderer," without looking at the facts.

"The cops, I saw on the news a couple of weeks ago, were wearing bracelets or something that said, 'I Am Darren Wilson,'" Maher says. "Why do you want to throw your lot in with this plain murderer?"

Saying Brown acted like a thug got Maher plenty of online hate mail:

Bill Maher called Mike Brown a thug. If you're not ready to say people should boycott his show, then what more would it take?

Did We Plug Our Ears When Bill Maher Said Michael Brown 'Was Acting Like A Thug'? #YesWeDid

But Maher probably won't care. As he told us back in 2003: "As long as I get equal amounts of angry mail from the left and the right, I know I'm doing my job."