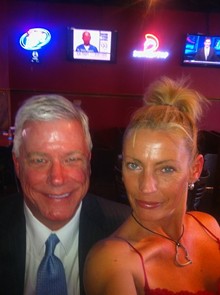 The whole "pantless party" thing is not helping Peter Kinder with McCain voters, Public Policy Polling finds.
Governor Jay Nixon would basically stomp the crap out of his likely Republican challenger, Lt. Governor Peter Kinder, if the 2012 gubernatorial election had been held this week.

In fact, according to a newly released poll from North Carolina-based Public Policy Polling, Nixon would beat Kinder by nineteen points -- just two points ahead of the polling for a virtual unknown, attorney Bill Randles.

Randles, a Christian conservative/Harvard Law School grad/self-described savvy investor, is the only other candidate to formally announce his intentions to run for the Missouri governorship. If the election were this week, he would have lost to Nixon by 21 points, the pollsters say.

In that match-up, 30 percent of those polled were undecided, with 45 percent opting for Nixon and 24 percent for Randles. And if Kinder were the Republican nominee, Nixon would have won with 50 percent of the vote to Kinder's 31 percent -- essentially a two-point difference, which makes it fall squarely within the poll's margin of error (+/- 3.9 percent).
That's very bad news for Kinder -- as the state's lieutenant governor, he ought to be doing much better than a guy no one's heard of.

And it's clear that we shouldn't take this as a surge for Randles: Later in the poll, 75 percent of those surveyed said were simply "unsure" if they had a favorable impression of Randles, including 81 percent of people who voted for John McCain in 2008.

In light of that, it's safe to say that any Republican without strong negatives could probably score about 21 points below Governor Nixon. The fact that Kinder's doing just as badly, despite his high name recognition and years in politics, suggest that GOP voters simply aren't thrilled with a candidate who spent some time in his 40s creeping around Metro East strip clubs.

Indeed, only 29 percent of those polled who reported voting for John McCain in 2008 had a "favorable" impression of Kinder, compared to the 42 percent who reported favorable impressions of Nixon, who is, again, a Democrat. Former Governor Matt Blunt inked favorability ratings from 53 percent of McCain voters, while former Senator John Danforth scored with 47 percent.

And, indeed, the poll showed that all that talk about Danforth potentially taking on Nixon was pretty strategically sound wishful thinking -- Danforth, the poll found, would beat Nixon, 45-39.

As the pollsters conclude in their press release, "Too bad for Republicans that former Senator John Danforth decided against a gubernatorial bid in Missouri next year--because he is the only one revered enough to even come close to beating the popular, moderate incumbent Jay Nixon."

You can see the complete results here; 632 Missouri voters were surveyed. The company reports that the poll was not paid for or authorized by any campaign.