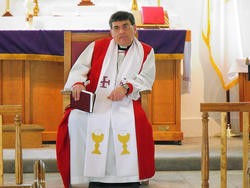 Bisop Sigillito
Martin Sigillito, the American Anglican Bishop and lawyer who was accused of being at the center of a massive real estate Ponzi scheme that fleeced the wealthy and the working class alike here in St. Louis, was found guilty this morning on 20 counts of wire fraud, mail fraud, money laundering and conspiracy. A sentencing date has not been set.

The story of Martin Sigillito was first broken by the Riverfront Times' own Nicholas Phillips in the 2010 feature, "White Collar Crime." Phillips has frequently checked in with dispatches on the twists and turns of the case as its moved through the courts; you can relive the experience, with its detours into hovercraft funding and his accusations against the FBI and his secretary, by clicking on this link.