Send a News Tip
Some notable stories from around Missouri this week: 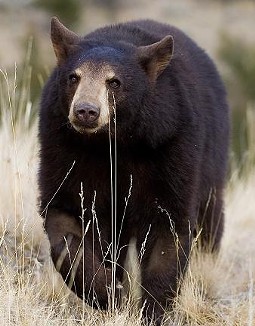 Missouri only has 150 to 300 black bears. Well, minus one: an adult female black bear was found murdered in a creek in southern Webster County, near Springfield (which is a big deal, because they're a protected species). According to the story in the News Leader,

The bear had been shot with an arrow and some body parts had been removed.

Whoa. Bear organ harvesting? Or a mad scientist creating a "Frankenbear"? Wait - isn't that a cereal? Are we being insensitive?

Seems like every so often, some nutjob will canoe down the Mississippi, then people talk about it. (Native St. Louisan Eddie Harris happened to write a kick-ass book about it, but we digress).

Well now we have CNN's Neal Moore, who according to the Hannibal Courier-Post is paddling down the Mississippi in search of "positive" stories. He must've been inspired by the life-affirming gaiety chronicled in our Big Bloody blog series.

Anyway, this Moore fellow somehow charmed the pants off Hannibal, because look what happened:

Before departing Hannibal, Moore was given an opportunity only one other person in roughly the past century has had - spend the night in the Mark Twain Boyhood Home..."It was incredible. It was quite literally the time of my life. I just had an incredible time," he said, estimating he slept five hours. "It's one thing to read the books, but to actually read the book inside that (Samuel Clemens') bedroom..."

He's now apparently heading for St. Louis - should we let him sleep up in the Arch? He is, after all, from CNN....

National T.V. has also come to town way down river. This Saturday, America's Most Wanted will be featuring the unsolved 1998 double murder of a mother and daughter in Portageville, Missouri (south of New Madrid) and its connection to a different murder in Greenville, South Carolina.

The Southeast Missourian picked up that story from the Sikeston Standard Democrat.