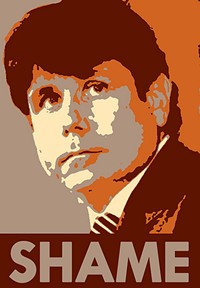 flickr.com/photos/jasonized
Rod Blagojevich's recent troubles have been a great joy to anyone who likes a little Victorian poetry mixed with their political theater. Who else would have the audacity to quote Tennyson and, on multiple occasions, Kipling?

Blago's favorite poem is Kipling's "If": "If you can keep your head when all about you are losing theirs and blaming it on you, / if you can trust yourself when all men doubt you ...Yours is the Earth and everything that's in it,/And -- which is more -- you'll be a Man, my son!"

He first heard it during a football game and said it had stuck with him ever since.

(By the way, was anyone else disappointed by the beleaguered governor's neglect of Browning -- Robert, not Elizabeth? No "Childe Roland to the Dark Tower Came"? Then again, perhaps it's not the best move for a man in Blagojevich's situation to quote a poem that begins, "My first thought was, he lied in every word.")

Today, however, at his not guilty plea, Blagojevich marked the solemnity of the occasion by switching from poetry to prose.

Sorry, Rod. TR actually said, "Black care rarely sits behind a rider whose pace is fast enough." He also said, "No man is above the law and no man is below it: nor do we ask any man's permission when we ask him to obey it."

Next time, better stick with Kipling.