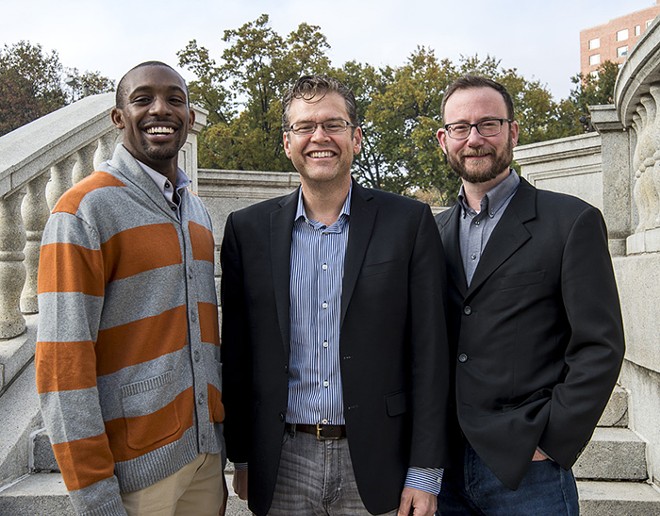 At the height of his career as a pro athlete, Blake Strode was around the 300th best tennis player in the world. He had twice taken a wild card spot in the U.S. Open by triumphing in free-for-all national playoffs that pitted him against other hopefuls across the country. But despite a mean forehand and speed, by late 2012 Strode found himself at a crossroads. He was clawing his way up the rankings, but not fast enough for his liking. In three years, his exploits as an athlete had earned him less than $60,000.

So Strode went with his backup plan: Harvard Law School.

"All my life I've had the dual track thing, school and tennis," says Strode, now 30, in an interview at ArchCity's offices.

Growing up, Strode had idolized Arthur Ashe, and he dreamed of fighting his way up the ranks of the world's best tennis players. He threw himself into the professional circuit.

"It's a difficult sport to make a living in," Strode concedes. "There's no draft, there's no teams, and you're sort of on your own until you reach a certain point." He never reached that point.

"I didn't get to play all the slams. I didn't become the top ten in the world or anything like that, but it was still a fulfillment of one of my childhood dreams. I got to travel the world. I think I played on every continent except Asia."

Strode pauses, and flashes a grin.

"And Antarctica," he says in a soft-spoken deadpan. "Obviously, there is no tennis in Antarctica."

Strode's lanky frame shares the couch with a throw pillow — given as a gift to the firm by a grateful client — which is printed with the cover from a 2014 issue of Riverfront Times, an illustration showing the firm's three founders as masked comic book superheroes leaping to pummel a cartoonishly evil judge. At the time it was published, Strode was two years into his studies at Harvard, having finally accepted the admission he twice deferred while pursuing his athletic dreams.

"I loved tennis," he stresses. "I loved all the challenges of it. But there was this other part of me that I wasn't attending to."

In his last year in law school, Strode was leaning toward taking a policy-oriented position in Washington. Then Ferguson officer Darren Wilson shot and killed Michael Brown.

Amid the chants for justice for Brown's death — which a grand jury would ultimately decide didn't warrant criminal charges — was a consistent thread of complaints about the way that local police departments squeezed fines from poor black residents. And even more disturbingly, behind those departments were municipal governments that survived by generating 20, 30 or even 50 percent of their revenue from those fines and fees.

"I was sort of watching everything unfold from a thousand miles away," Strode recalls. "A friend of mine sent me this Radley Balko piece, and he said, 'Have you heard about this ArchCity Defenders place?'"

The piece, written by Washington Post columnist Radley Balko, was titled "How municipalities in St. Louis County, Mo., profit from poverty." About 14,000 words long, it featured the three founders of ArchCity Defenders in what amounted to starring roles. Here were attorneys actually helping people trapped in unconstitutional court practices that set bail without hearings to determine whether detainees had the ability to pay it.

After reading the story, Strode emailed Harvey. "It all happened very quickly," he says.

Within two weeks of their first email, at Harvey's suggestion, Strode applied for a Skadden Fellowship, a sort of "legal Peace Corps" funded by a giant national law firm. Each year, two Skadden fellowships are awarded to recent law school grads, each lasting two years. The fellowships pay for them to work pretty much anywhere they want. Strode decided he wanted to work for Harvey in St. Louis.

The fellowship pays each attorney for two years at a $50,000 annual salary — or roughly $100,000 less than what Strode's classmates were earning at corporate firms.

"There's a point at which people tend to choose a private firm path or the public path," Strode says. "I decided fairly early on in my law school career that I was firmly rooted in the public interest camp. I didn't do any 'Big Law' interviews during the time I was in law school; that was not the path I was going to take."

The year 2014 brought in around 200 applications for the fellowship, about 30 from Harvard alone. As with the U.S. Open playoffs, though, tough odds turned in Strode's favor. He took one of the two coveted spots.

And so after graduating Harvard in 2015, Strode moved back to St. Louis to start at ArchCity Defenders in September. By then, the firm was embroiled in its biggest case to date — a class action lawsuit accusing the north-county municipality of Jennings of running an unconstitutional debtor's prison.

Strode, all of 29 years old, was thrown into the lawsuit with veteran civil rights attorney Stephen Ryals. It didn't take long for him to start turning heads. Over the next year, Strode went from learning the ropes of federal litigation to sitting at the negotiating table, hammering out settlement terms on monetary damages for hundreds of clients.

To Harvey and others' joyful astonishment, Strode, Ryals and attorneys from two other legal clinics made it work. A judge signed off on the terms, and ArchCity Defenders emerged from the negotiations with a $4.7 million settlement.