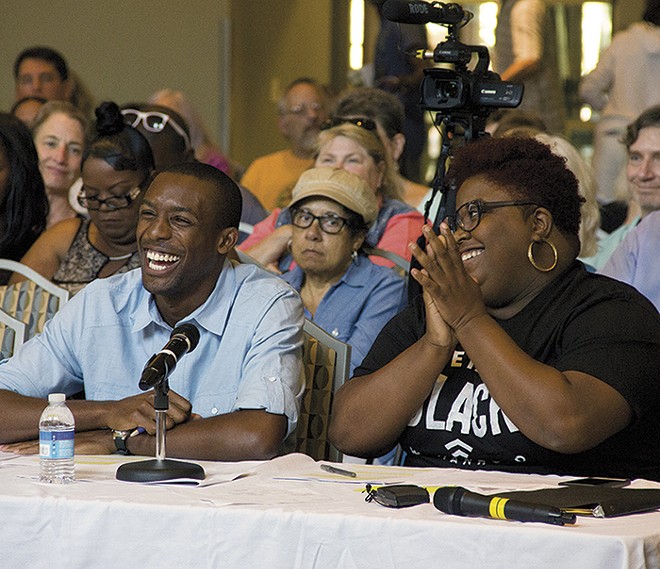 Talk to the lawyers who've worked with Blake Strode, and you'll start hearing the word "brilliant" a lot.

"He's got a brilliant mind," says Michael-John Voss, who notes that Strode didn't get much of a grace period while going from law school student to Skadden Fellow to full-time staff attorney.

"At first, he was spending like 80 hours a week to catch up on the backlog," Voss remembers. "There were 200 documents filed in the Ferguson debtors' prison case alone. It was impressive. There were over 30 civil rights cases, and he naturally fell into the role of managing them."

SLU law professor Brendan Roediger had first met Voss and Harvey when the co-founders were still in law school. He's watched the firm expand into the plucky, punchy voice for the underdogs around St. Louis.

"I was initially mad when I met Blake," Roediger jokes, "because I thought I was the best lawyer-tennis player."

Like Voss, Roediger was initially impressed by how quickly Strode tore through the backlog of pending cases. The two attorneys eventually worked together on the Jennings settlement, which produced $1.2 million in legal feels to be split between ArchCity, SLU's legal clinic and a third legal aid group, Equal Justice Under Law. The remaining $3.5 million pot was directed to around 500 people whom Jennings had jailed over unpaid fines and fees, providing about $1,500 for each day the detainees spent behind bars. In a separate settlement, Jennings also agreed to alter its court policies for how it would enforce fee collections in the future.

"He litigates like he's been litigating for a decade," Roediger says of Strode. "It's a combination of analytics and confidence. He wins like he's won before, and loses like he's lost before."

To Strode, the first year on the job was like "drinking from a fire hose."

"I was learning, in practical sense, how to practice law," he says. "I was engaging with our clients for the first time and doing a lot of intakes, getting a lot of client narratives and translating those into pleadings. And then the Jennings settlement became a model for us on what we seek to achieve out of the debtor's prison litigation."

It was a lot to juggle. And while Strode dove into the deep waters of litigation — simultaneously representing indigent clients in municipal courts around St. Louis County — he started building connections with local activists, particularly with the St. Louis Action Council, a coalition of protesters, activist groups and established social justice organizations.

In a more traditional law firm, Strode might have been encouraged to keep his battles in the courtroom.

"One thing I appreciate so much, and something that is so unique about ArchCity Defenders, is that it's just not the way things work in most legal organizations," he says. "I'm a big believer that all of the problems that we face, including the legal problems, are really at their core political problems. I don't want to speak for anyone else, but I think that the way ArchCity Defenders engages in advocacy is a reflection and part of that belief."

On June 16, 2016, Strode got the chance to speak directly to the political side of the problem — not as a candidate, but as co-moderator of an unprecedented series of debates organized by ArchCity Defenders and local activist groups. Strode was joined by Kayla Reed, a Ferguson protester and community activist, and the two grilled candidates for both the Circuit Attorney's Office and St. Louis mayor. Their questions were intentionally framed around the aftermath of Ferguson and the Black Lives Matter movement.

After their debate experiences, Reed and Strode, activist and attorney, started meeting up at Mission Taco Joint every few weeks, passing ideas back and forth on the state of St. Louis. Last year, Reed joined the board of ArchCity Defenders, and it wasn't long before Harvey confided that he was planning on leaving the firm to help create a national bail-fund organization. Harvey hinted to Reed that while the firm was willing to conduct a national search for its next director, he was also considering a certain former tennis pro on staff.

Reed held her tongue, though she says she tried to plant the idea in Strode's head that he should be the one to take over for Harvey.