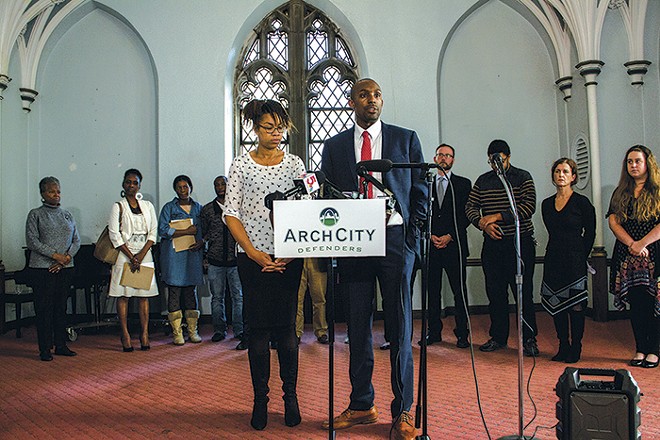 In early November, Strode stands on the wine-colored rug beneath the vaulted ceilings of what used to be a sanctuary on the second floor of Christ Church Cathedral. Behind him, arranged in a semi-circle, Voss, staff attorneys and the plaintiffs in the firm's latest class action lawsuit face reporters who have gathered for a press conference.

At a podium, Strode announces that the firm has just filed a class action lawsuit against city of St. Louis over the "unspeakably hellish and inhumane conditions" at its Medium Security Institution — better known as the Workhouse.

"Detainees in the Workhouse are subjected to conditions that include infestations, extreme temperatures, overflowing sewage and more," Strode says, adding that the vast majority of inmates at the Workhouse aren't yet convicted of a crime. The plaintiffs in the suit allege they lived in sub-human conditions, with dozens sharing toilet and shower facilities and breathing in mold and waste.

One man detained over the summer said that Workhouse guards and staff were well aware of the filth and mold, and that kitchen workers told him, "If you see the mice feces, just scrape them off."

The latest lawsuit follows the strategy ArchCity Defenders has been refining for years. The strategy doesn't begin with the idea for a lucrative class action lawsuit, but with individual clients, regular people in need. In Jennings, those clients were being jailed for bench warrants and shaken down for traffic ticket revenue. For the Workhouse case, the firm's attorneys found clients as they attempted to bail out inmates during the heat wave last summer that pushed temperatures inside the facility to 125 degrees.

Thomas Harvey, though, is not standing with the attorneys and plaintiffs behind Strode. Casual in a cozy gray cardigan, he's sitting in the final row of seats, watching the next executive director of ArchCity Defenders command the room.

The past year has seen Harvey focusing his efforts on the cash bail system. For many defendants, being held on a $500 or $1,000 bond presents little obstacle to freedom. If they don't have the cash, surely they know people who can pool the funds together.

But that's not the case for those mired in true poverty. They don't have the cash or the connections.

Back at his office, Harvey weighs in on the subject with palpable frustration.

"There was a time when we took the idea of liberty and not throwing human beings in cages seriously enough that the presumption was, whoever is charged with a crime, they be brought before the court, told what they're going to be charged with, told what their charges were, and released on a promise to come back on the day of court," he says, tapping the table for emphasis. "It's very hard for even lawyers to remember that in the American legal system, the presumption is no bail." 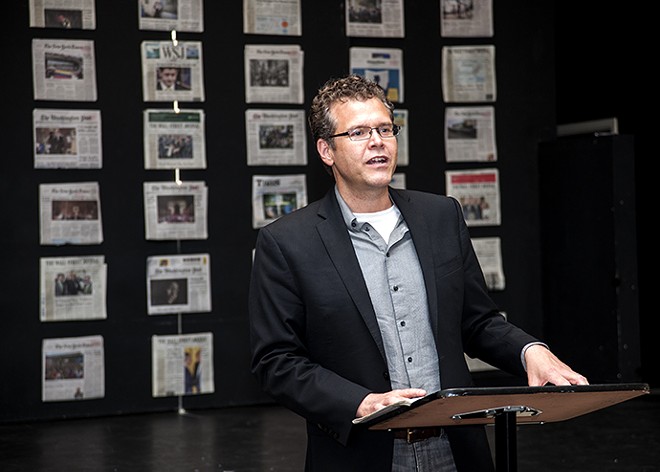 In the city of St. Louis alone, more than 1,000 people are in jail because they don't have money for bail. Across the country, that number is as high as 450,000, says Harvey. He wants to reach as many of them as possible, and in January he's going to do so as the new national director of strategic relationships and advocacy for the Bail Project.

It's a massive step up in terms of scale. While ArchCity Defenders has mobilized bailout campaigns in St. Louis — this year, the firm raised $40,000, enough to free 25 people from the Workhouse and the city's Justice Center — Harvey has his sights set far, far higher.

Modeled on the Bronx Freedom Fund, which has been running in New York City for more than a decade, the Bail Project will use a $16 million fund to bail out a projected 160,000 people in the next five years. The money will be "recycled" as the cases are adjudicated and the bail amounts returned to the organization, and individual community funds will be set up in 40 jurisdictions, including St. Louis.

Leaving St. Louis is both a bitter departure and a sweet reunion for Harvey. He met his wife at the University of Missouri while he was studying for his master's in French literature. She was studying Spanish. Academic careers being what they are, the couple found themselves flung to different parts of the country, and they've essentially lived a long-distance marriage since 2007. He'll be moving to Los Angeles, where she is a Spanish professor at California Lutheran University.

His exit, though expected by his cohorts at ArchCity Defenders, still hurts. (Both Kayla Reed and Director of Advocacy Jacki Langum offered virtually the exact same commentary: "We're grieving.")

This will be the second departure for an ArchCity Defenders founder, as John McAnnar left St. Louis in 2015 to become general counsel for the temp agency run by his father in South Carolina.

Under Harvey, the staff has swelled in the past three years. Donations and grants poured in after Ferguson, increasing revenue from around $80,000 in 2013 to just under $800,000 one year later. Harvey was able to hire more lawyers; ArchCity now has nineteen full-time employees, who are supported by dedicated volunteers and a rotating cast of interns hailing from all corners of the country.

While continuing to deploy attorneys on criminal defense cases, ArchCity Defenders is ramping up its civil rights work. The firm filed six civil rights suits in 2017 alone, bringing the number of such cases that are pending to nineteen, among them a massive class action suit against thirteen county municipalities. The cases — Harvey's legacy as director — will fall to Strode and Voss when Harvey formally steps down on January 1.

With Harvey gone, Voss will become the sole remaining founding member of ArchCity Defenders — the last of the original superheroes who graced the RFT cover in 2014, back when the firm was little more than three lawyers with meager experience and lots of guts.

"It's a personal loss to me," Voss says of Harvey's move. He still vividly remembers sitting down with Harvey at Cafe Ventana, the two law school students tossing around ideas for a project that seemed beyond their abilities and resources, but felt like the right thing to do.

Editor's note: A previous version of this story incorrectly described the Christ Church Cathedral as decommissioned. We regret the error.