Back in the Gangway

I had made a follow-up reporting trip to St. Louis the week before speaking with Bauer. In Carondelet, I found two earwitnesses I hadn't spoken to during my reporting for the first story, obtained a resident's video and tracked down the original owner of the gun allegedly found beneath Bufford. (The gun owner told me that particular pistol, purchased from Mike's Guns in St. Charles, Missouri, had been stolen from his home some years back; public records show he reported a Glock 34 stolen from his car in 2018. This ran counter to what force investigators had noted in their report, that "a computer inquiry on the Glock pistol revealed no theft.")

But the thrust of the trip was to examine the gangway at night with my own eyes. The experiment was thwarted by a light from a neighbor's basement window that illuminated the grassy path of the gangway, altering the conditions from the night of the shooting. The resident did not answer his door — I knocked a lot — and the basement light stayed on that night until I gave up. I drove back to Chicago the next morning.

That's when the moon entered my thinking. I decided to go back to St. Louis when the moon would be similar in size and illumination as the night of the shooting. I planned to reconstruct the conditions of the night Bufford was killed, as best I could. Along with matching the moonlight, I would use forensic tools to measure the brightness and contrast of the gangway to calculate visibility probability. I had even arranged for a stand-in to take the place of Bufford. 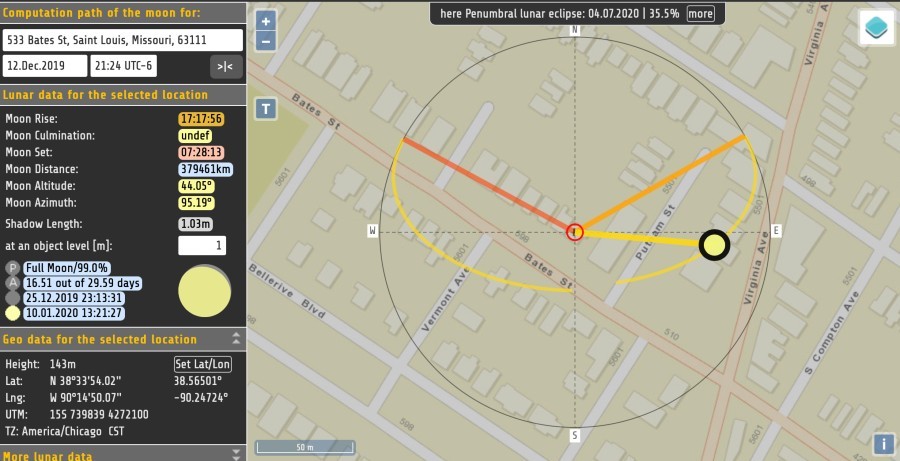 MOONCALC.ORG
The moon's positioning at the time of the shooting, according to mooncalc.org.


According to the website mooncalc.org, on December 12, 2019, the moon was almost as bright as it could be, a 99 percent full moon. When I would return on November 18, 2021, the moon would be even brighter, at 99.9 percent brightness.

This would not be the only variable to control, Bauer told me. The moon's overall position in the night sky — its altitude and azimuth (the angle of a sphere) would also be important factors to determine visibility. And it turns out, the moon's position that night, approximately 44 degrees altitude and 95 degrees azimuth, was not directly in line with the gangway.

"It wouldn't have had any direct illumination," Bauer said. Had the moon been up high and to the left the night of the shooting, it could have shone on the pale-colored farmhouse next door and provided some bounce, but Bauer added "we know the moon was not there."

There were no independent light sources in the space. Beyond the gangway, police photographs show the neighbor's porch light was illuminated the night of the shooting, but that would have only made it harder to see what was happening in the narrow space between the houses.

But even when it's really dark, you can sometimes make out objects and people because of the contrast with the background, Bauer reminded me. This is why I needed to reconstruct the scene and judge with my own eyes, as well as secure a set of special tools to measure luminance and illuminance.

To measure brightness, I rented a lux meter, specifically a SEKONIC C700U SpectroMaster, from a camera gear shop in Chicago. Online, I also rented "one of the best hand meters on the market," a certified calibrated Konica Minolta LS-110 Luminance meter, to gauge the contrast between a stand-in's body, who would be wearing similar clothing to Bufford's that night, and the wooden fence behind her. I would also need to test the stand-in's "gun." To be clear, I did not use an actual gun in this experiment. For my purposes, I instead selected an all-black can opener of similar size and thickness to a Glock, to sample against the fence. By measuring the contrast of the object (the body and the gun) against the background (the fence or the jacket or the T-shirt), it validates how strong the silhouette is, according to Bauer, to determine "threshold of detectability."

Above all, the neighbor's basement light would need to be turned off or fully covered. I purchased a 75-square-foot roll of heavy-duty, extra-wide aluminum foil and tape. With some training and these tips, I headed back to the gangway.

As chance would have it, the longest lunar eclipse of this century was to take place hours after my scheduled reconstruction. In the early morning hours, the full moon would travel through the edge of the Earth's shadow. Because of its reddish hue, it's called a blood moon, and although it had no bearing on the experiment, the realization was chilling as I prepared to hit the road.

My son wanted to know what I was up to. I explained that I was trying to find out what happened to somebody's son who died.

"What happens when we die?" he asked. He knew what my answer would be.

That's what I say when I don't know something, so I find myself saying it a lot when my son asks questions.

"Does the soul turn into something else when the body dies?"

The stand-in wore a gold Missouri Tigers T-shirt, black sweatpants and a black puffer jacket. Underneath the jacket, we placed a black cross-body bag. A notable difference between the stand-in and Bufford was skin tone. The stand-in was fair-skinned and white, while Bufford was Black with a medium skin tone. In the dark, it would be easier to see the stand-in's exposed head and hand than Bufford's. If I couldn't see a white person in the dark, I definitely wouldn't be able to see a Black person.

When we arrived around 7:45 p.m. (to be in range of the matching moon azimuth), the neighbor's basement light was on, again. I knocked on his door, again, and this time the homeowner answered. After identifying myself as an investigative journalist, and a little back and forth about what I was doing, he obliged and turned off the inside lights, leaving his porch light on. Check.

I had purchased a neon yellow safety vest and an orange traffic cone at a hardware store earlier in the day. But Bauer suggested I not wear the vest, to avoid bounce from any light that might alter the readings. So I placed both items on the sidewalk, as a signal to passersby that we were doing something with permission and intention. (At some point during the reconstruction, one such passerby casually took the safety vest. We did not intervene.)

I started with the lux meter. I took several readings over about ten minutes, clocking the same result each time: "UNDER." This meant the conditions were too dark to measure. 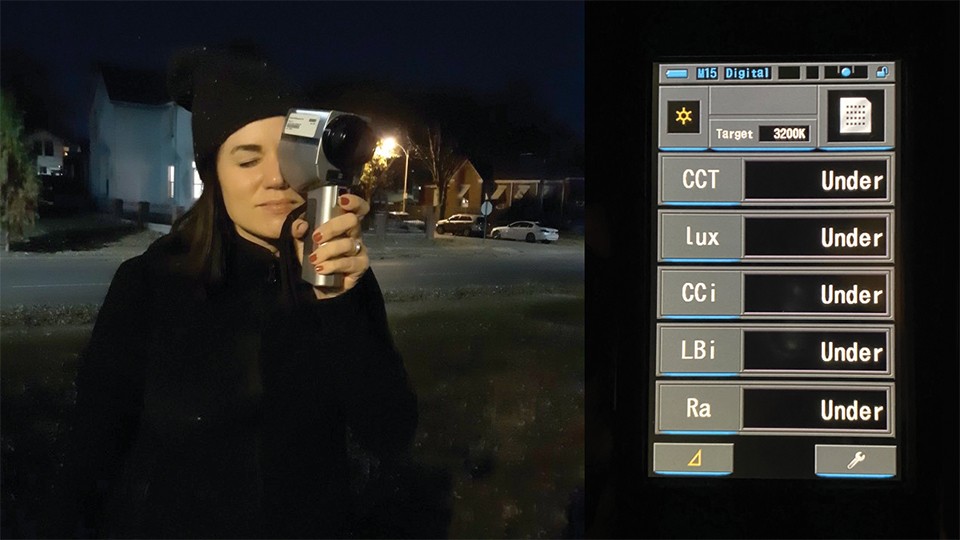 ALISON FLOWERS
Using the photometer in the gangway.

I moved on to the luminance photometer. For more than half an hour, and with Bauer on speakerphone at times, I measured the stand-in's different stances — front-facing, right side-facing, left side-facing, back-facing — in candelas per square meters. At the same time, I measured contrasting objects and backgrounds, in more than a dozen different scenarios, such as the ratio of the stand-in's (again, white) forehead to the fence or the ratio of the stand-in's gun (again, it was a can opener) to the fence or the jacket. Using a simple calculation (contrast = greater value minus lesser value/greater value) and plugging it into a chart, I was able to determine the probability of detecting contrast.

In other words, detecting contrast between dark objects in the gangway was spotty at best and sometimes nonexistent. Meanwhile, discerning what the objects actually were — being able to tell that the object is a person or a gun, rather than a dark blob — was a matter for human eyes.

My vision is 20/20, according to a recent checkup.

At 8:49 p.m., recording my observations in a voice memo, I approached the gangway. The stand-in stood at the other end by the fence. In the solemnity of this experiment, I closed my eyes and pictured Bufford in the darkness. In my mind, he was alive and afraid. My mind wandered over to my own son, and I opened my eyes, so I wouldn't have to see.

"OK, here I go. Alright. The [porch] light is in my eyes. I am at the mouth of the gangway. I cannot see a person."

I walked further in, about a quarter of the way. "I can sort of see a person."

I kept walking to the halfway point.

"I can see her hand move. She's white, and so I can see her white hand. She's wearing a black jacket. I can tell that there's a strap across her chest, but I can't see the bag."

I saw the whiteness of her hand against the black bag. "I can't see if she has anything in her hand," I told Bauer, who was on speakerphone.

"I do," she said. She was holding the can opener.

"Oh my gosh, OK. I cannot make out anything in your hand. I wouldn't know that you're holding an object."

Still standing halfway into the gangway, about a minute had passed since I entered it.

"I mean, I can see you. I just can't see anything in your hand other than your white hand."

Walking another quarter into the gangway, I said: "I still can't see this object."

I stopped three-quarters of the way through the gangway. This was deeper than Roethlisberger went. My eyes had been adjusting for more than two minutes. This was far longer than the seconds the officer had before firing. But at this stance, for the first time, I could detect that the stand-in was holding a black object of some kind.

"OK, I think that's all." After more than an hour of tests, we packed up.

There's always the great human test, I reminded myself, and it's pretty agreeable with the numbers. I could not see what Roethlisberger said he saw. I could not see a person at the mouth of the gangway, where he said he was standing when he fired shots. Given the placement of the shell casings in the gangway, it is clear that Roethlisberger actually was about halfway into the gangway — but when I stood in roughly the same spot, I could only discern that there was a person, not that they were retrieving or holding any object.