Board of Aldermen Bill Would Ban Tents in St. Louis Public Spaces

Board Bill 14 makes specific mention of the River Des Peres

Ryan Krull
Board Bill 14 would ban living in tents in public right of ways.
With the early afternoon sun high in the sky, the temperature hit 81 degrees, and Kim had unzipped every opening in her tent, trying to let in as much breeze as possible.

Kim, 54, is one of about twenty people living in tents alongside the River Des Peres near Gravois Road. Many residents and nearby business owners are unhappy about the so-called "River Des Peres tent city," telling the RFT it's bad for business and makes the area unwelcoming. Complaints from local residents spurred 16th Ward Alderman Tom Oldenburg to introduce Board Bill 14, which would ban people living in tents set up in public rights of way. The bill specifically mentions the River Des Peres.

Kim says it's not like she's eager to be living in a tent alongside a river which, as part of the city's sanitation system, functions much like an open sewer. She's been living on the streets since March 2021, and in the tent for about two weeks.

She desperately wants to make it back to Foley, Alabama, where her daughter lives.

L.J., who's been staying at the site for about two months, says that he wants to get back to his mother in Granite City, Illinois, but he’s on parole and worries that by traveling out of state he might "get locked up and be back in the system."

At the end of last week, Kim and L.J. endured a sustained rain. Water seeped into their tent, soaking their clothes and blankets and just about everything they own.

"Someone brought some new clothes by, and we're grateful, but they don't last forever. It takes money to go to a laundromat," Kim says.

L.J. says that in the two months he's been staying by the River Des Peres, he's seen multiple people succumb to Fentanyl overdoses.

The RFT reached out to St. Louis Metropolitan Police Department to see if they had any records of deaths occurring at the campsite, but did not get any information from the police other than a reply saying they would check into it.

On the opposite side of the river, 61-year-old Floyd Wayne had been living in a tent for about a month. He lay on the floor of his tent, saying that chronic pain brought on by a bleeding ulcer made it impossible to get comfortable on the cot he usually slept atop.

He says that he's been robbed while staying here, and that not everyone living in tents by the river is on Fentanyl, but its use is prevalent.

"I have no idea why people are using the one thing that's killing everyone," he says.

Despite all that, L.J., Kim and Wayne all say the ad-hoc tent community by the municipal river is better than a shelter.

"The way they treat people at the shelters is terrible," L.J. says. He explains he'd been robbed of his phone, ID and other documents while staying at St. Patrick's Center. "All that stuff came up missing."

Kim says she'd previously stayed at Little Sisters of the Poor but had been kicked out for failing to make it back by curfew.

"If you're caught doing a little minor thing they'll kick you out," L.J. adds.

Wayne has stayed before in city-run shelters, which he calls "raggedy ass." The first night he stayed at the Biddle House shelter he was taking a shower when someone stole his nice coat and money. He says the shelters come with rules that don't allow you to be in them during the day, which to his mind defeats much of the purpose of having a shelter.

Oldenburg, the alderman who introduced the bill that would ban tents in public rights of way, says that the original motivating factor for Board Bill 14 was for safety reasons.

"But it's become clear now that also part of this is asking, how do we get to some solutions? So people don't have to live in tents," he says.

Oldenburg adds, "My concern is that the tents have grown [in number] over those two months…. How long before it becomes like the other encampments and the city just clears them out?”

Oldenburg’s bill passed 7-0 out of the Public Safety Committee, but Alderman Bill Stephens, whose ward actually contains the encampment, has asked the Board of Alderman to "pause" action on the bill.

Local shop owner Ryan Hess doesn’t agree with Stephens. Hess owns Chippewa Glass and Mirror Company, a company that has been in Hess's family since the 1940s. The store is located about a block away from the River Des Peres, near the city/county line.

"I wish the city would do something for the homeless people, but at the same time we have to run a business and the customers don't like to see that type of thing," Hess says.

By "that type of thing," Hess was referring to incidents like one that happened recently, in which a man from one of the tents had a psychotic episode and was "acting weird" at the entrance to Hess's business. Hess says that car break-ins and other property crimes have increased in the months since the encampment began. Two of his shop trucks have been broken into in recent weeks.

Hess says that he always votes Democrat and voted for Stephens, the current alderman. But Hess feels like his business is currently paying a price for the city's inability to handle a serious issue.

"Honestly, we're in the city and a lot of county people come to our business," Hess says. "They're already freaked out going to the city, which I disagree with — it's obvious nothing's going to happen. But yeah, it hurts our business when they see stuff like that."

Another nearby small business owner didn't want to be quoted but he was adamant the tent encampments were bad for business and he wanted them gone.

Stephens asked for the Board of Aldermen to pause action on Board Bill 14 both because he doesn't think it's good policy, but also because he fears it could backfire.

"I requested a legal analysis of it by the city counselor, as well as the Legal Services of Eastern Missouri, because there's a very similar law that was enacted in Boise, Idaho, that resulted in a federal civil rights case," Stephens tells the RFT . "My concern is that Bill 14 would take the city of St. Louis down a very similar path." 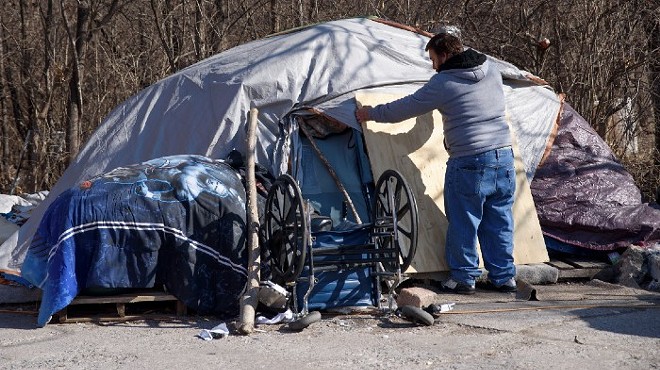 Besides the potential legal landmines, Stephens thinks it is bad policy to remove everyone living in tents by the river, forcing them to start over elsewhere in the city.

"When we say, ‘OK, River Des Peres encampment, you can't be here anymore, you have to go elsewhere,’ well, the only stability that they've managed to eke out is now disrupted," Stephens says.

Stephens points to programs like the Jefferson Spaces tiny house community, which provide people with a small abode to stay in for as long as they need as well as social support services onsite. The tiny houses also offer much more autonomy to residents than what awaits them at some other shelters.

Stephens has helped people staying at the River Des Peres tent city get on the waiting list for Jefferson Spaces, but unfortunately that waiting list is slow-moving.

Ultimately, there needs to be an expansion of Jefferson Spaces or more places like it. Stephens also floats the idea of retrofitting one of the many empty buildings downtown. The Jefferson Arms, specifically, he says could be transformed into a larger version of the community currently finding success in the tiny home project at Jefferson Spaces.

"I understand their frustration," Stephens says, speaking to business owners and others who work near the River Des Peres. "There has been movement behind the scenes at City Hall, which isn't always apparent; there's been progress. But the general public as they drive by or as they work in the area, they just see tent encampments. So I understand their frustration. I appreciate their patience and their understanding. Especially the understanding that whenever it comes to human welfare, we have to take a thoughtful, nuanced and constitutional approach."

Wayne, Kim and L.J. all tell the RFT that for the most part no one has bothered them, that on many occasions people from the area have come by and offered to buy them things from the nearby Walgreens.

Wayne recounts one recent incident when someone walked up and asked Wayne if he needed anything.

"A house and a shower," Wayne replied.

The person said he couldn't do that.

"Then how about some batteries for my fan?"

Wayne says that later in the day the good Samaritan returned with a package of D batteries.