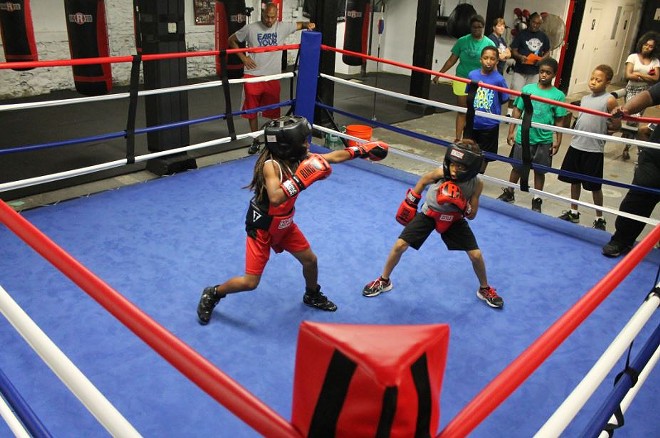 Ray Downs
DeMarcus Murphy and Marcus Luther in a friendly spar at STL All City Boxing. An amateur boxing tournament will take place at Tandy Park this weekend.

Laura Hughes didn’t come back to St. Louis to run an amateur boxing event. She came back to bring people to The Ville. She came back, specifically, to create a master plan for portions of The Ville, to rehab homes and to help develop the area that she grew up in.

Hughes, the president of Fleur De Lis Development Corporation, is doing that. One block from Tandy Park, her company is rehabbing around 15 multi-family homes for people with housing choice vouchers and will turn the former Simmons Elementary School into apartments. But as she worked in the community, people kept mentioning something else.

It led her to create the first-ever Salute to St. Louis Boxing & City-Wide Boxing Tournament. The event will take place this Saturday, August 20, from 10 a.m. to 4 p.m. at Tandy Park. The day will begin by honoring legends of the St. Louis boxing scene, followed by multiple amateur boxing bouts. It will be held outside and, in addition to free music and food, will also host several Sumner High School reunions.

“This is the first time in the 10 years that I've been involved in amateur boxing that so many guys have been honored and particularly at a historic place like that,” says matchmaker Earl McWilliams. “So this is the first of its kind in a while.”

Growing up in The Ville, Hughes’ dad was a boxing fanatic. He would cut out boxing magazine collages and hold fight watch parties in their basement.

But Hughes didn’t know the depths of the boxing history in St. Louis — not like she does now. For the past year and a half, Hughes has dived into the history of St. Louis boxing.

Boxing once ruled the world, and St. Louis was its home, she found. Droves of professional boxers have come out of St. Louis, including some of the world’s most famous, such as heavyweight Sonny Liston, light-heavyweight Archie Moore and the entire Spinks family. 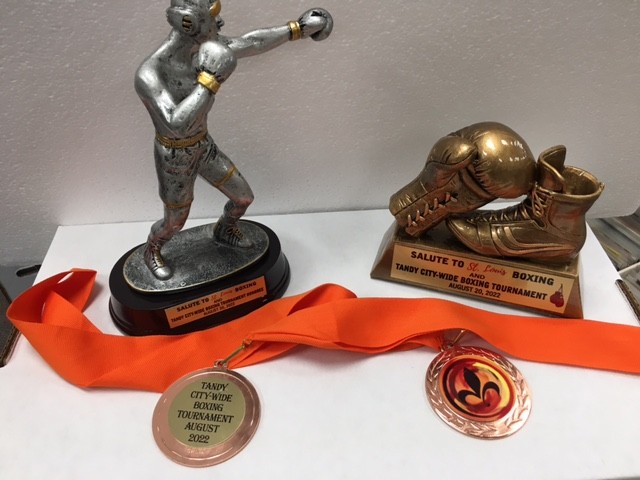 VIA LAURA HUGHES
Trophies for this weekend's Salute to St. Louis Boxing & City-Wide Boxing Tournament. The event will honor some of St. Louis' most influential people in the boxing world.

Thinking about the history of boxing in St. Louis makes Hughes shiver. She likes rehabbing housing. “But this boxing, man,” she says, pausing, “it just makes me, like, just overwhelmed.”

If St. Louis was at the center of boxing in the country, Tandy Recreation Center was its “mecca,” Hughes says. It was the place where kids learned how to tape their hands and get up from their first knockout. It’s where the top amateurs trained, and throughout the 1970s, Tandy was the home to a national amateur boxing tournament: The Silver Gloves. Stephan “Big Shot” Shaw, a professional boxer, calls Sam Westbrook, a coach at Tandy during the mid-1900s, “the Godfather of St. Louis amateur boxing.” Hughes has pictures of people watching fights in Tandy, and the park is nearly bursting at the seams.

“People are literally like hanging off the walls, like, it's so packed,” she says. “When you look at the picture, you can hear it. Like you can just see all the intensity.”

Boxing isn’t as big anymore, but it’s still alive in St. Louis. McWilliams, the matchmaker, estimates there are around 10 to 15 professional boxers from St. Louis, including heavyweight Shaw, who is currently undefeated at 17-0, winning his last fight with a knockout in just a few minutes. He comes from three generations of St. Louis boxers and his grandfather was a legendary boxing coach, who trained amateurs for decades.

Before fighting on ESPN, though, Shaw grew up fighting in the local area recreation centers — Tandy, Gamble, Wohl and 12th and Park. His third fight, at nine years old, took place at Tandy. He says he wants “to give light to those rec centers to keep them open.”

“Those rec centers, man,” he says, “those are staples to communities.”

Shaw says he will be there on Saturday, helping with the event and talking with young fighters.

“I feel like I'm leading a torch as far as boxing on the highest level, especially coming from St. Louis, Missouri,” he says. “So, it's only right to have a representation of the amateur-to-pro pipeline there.”

McWilliams helped set up Saturday’s fights. He made it a priority to highlight St. Louis trainers and boxers. There will be three Tandy fighters, for example, along with ones from other recreation centers.

But for each of those boxers, there are hundreds of people working behind the scenes to allow them to thrive: trainers, ringside physicians and recreation center directors. The event will highlight those, McWilliams says, who “deserve their flowers.”

“They’ve done just so much for the community because it goes beyond boxing,” McWilliams says. They're reaching out and volunteering their time to young people. It's not about the money. It's not about publicity. It’s about legacy.”

Already, 500 people have RSVP’d for Saturday's activities. But Hughes says she doesn’t want this to be a one-off event. She wants this to be an annual event that brings together the community and honors its boxing tradition.

“Throughout the nation, we have a reputation of being a boxing city,” she says. “Shame on us for not touting that. The news takes a great opportunity to highlight our not-so-great moments. But this is a victory for us as a city.”