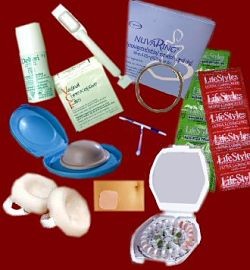 image via
Only YOU can prevent unplanned pregnancy and abortion -- but it's always good to have some help. And someone to pay for it.

Here's some absolutely shocking news for all you abstinence supporters and abortion fighters out there: Women who use birth control have fewer unplanned pregnancies and fewer abortions than women who don't. Common sense might have told you that, but now it's been scientifically proven by researchers at Washington University!

Alert readers may recall Dr. Jeff Peipert, an OB/Gyn prof who ran a study called the Contraceptive CHOICE Project from 2007 to 2011, of the effectiveness of various forms of birth control. Back in May, Peipert reported that, after crunching the numbers, he and his team had determined that IUD's and implants are the best methods for preventing accidental pregnancies.

"The impact of providing no-cost birth control was far greater than we expected in terms of unintended pregnancies," says Peipert. "We think improving access to birth control, particularly IUD's and implants, coupled with education on the most effective methods has the potential to significantly decrease the number of unintended pregnancies and abortions in this country."