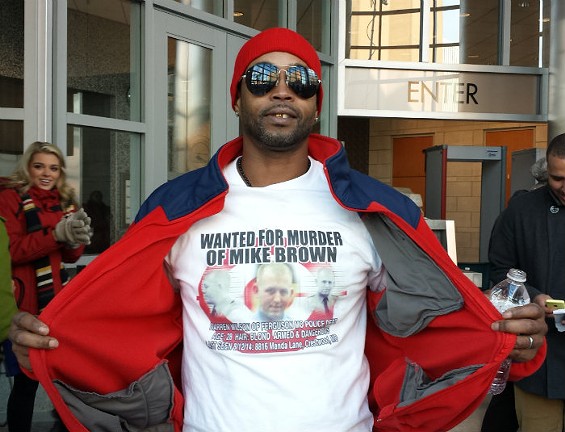 Attorneys for the family of slain teenager Michael Brown Jr. addressed the media this morning on a blustery day in downtown Clayton. Inside the Buzz Westfall Justice Center behind them, Dr. Michael Baden, a forensic pathologist who performed a secondary autopsy on Brown's body, began his testimony before the grand jury. It is believed he is one of the final witnesses the group will hear from as they consider whether or not to charge Ferguson Police officer Darren Wilson in the shooting death of Brown.

Attorney Benjamin Crump declined to go into the substance of Baden's testimony, and focused his remarks mainly on a message to area law enforcement.

"Regardless of the decision of the grand jury, this will be a defining moment in the history of the state of Missouri," Crump said. "To the law enforcement officers who will be patrolling the streets, we would like to thank you in advance for not having a repeat of the horrific encounters that took place in August."

Crump said that the members of the grand jury actually requested Baden's testimony and that the St. Louis County prosecutor's office obliged.

"We are also appreciative of the fact that the prosecutor's office opened the invitation for Dr. Baden's testimony," said Crump. "We do not know to what extent his testimony will be necessary or what subject matters will be covered. We are simply hopeful that whatever it is, it will offer some insightful analysis and independent analysis for the grand jury that they can use in reaching their decision."

Crump repeatedly declined to go into the specifics of Baden's review of other pathologists' findings or of the possible content of his testimony. Crump offered only that after reviewing the St. Louis County medical examiner's findings, Baden revised his findings on one of the wounds to Brown's chest. While he'd previously been unsure if it were a re-entry wound or an independent bullet hole, Baden has now decided it was "an additional entry wound into his chest; it was not a re-entry wound." Crump also added that Baden asked for and was provided with a list of things from the other pathologists' reports.

Baden will be testifying today and possibly tomorrow, and Crump said Baden will not be addressing the media about his testimony until after the grand jury's decision is announced.

"The family wants to associate themselves with the governor's statement and reiterate his denouncement of violence, looting and rioting in the name of Michael Brown," said Gray. "Law enforcement should have been equally condemned by the governor for their conduct at the same time he was admonishing the demonstrators. A strong message of zero tolerance should have been conveyed to all."

Louis Head, husband to Lesley McSpadden and Brown Jr.'s stepfather, appeared on behalf of the family but did not speak. Asked for comment, he declined initially, then returned and asked Daily RFT to take a picture of the T-shirt he wore under his jacket.

"This is my statement," he said.

The shirt read, "Wanted for Murder of Mike Brown: Darren Wilson of the Ferguson Police Department."

The grand jury's decision is expected to be released on or after November 15.