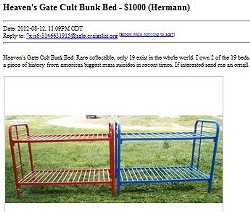 craigslist.org
On March 26,1997, authorities entered the mansion of the Heaven's Gate religious cult near San Diego to find the bodies of 39 people dead from a self-induced cocktail of phenobarbital and vodka. The deceased wore identical sweat suits and Nike sneakers and lay neatly arranged on bunk beds in the belief that they'd soon be picked up by a spacecraft and ferried away to a new beginning.

Now two of those bunk beds associated with the largest mass suicide ever to occur on U.S. soil can be yours for the low, low price of $1,000 each, or best offer. And if you think that sounds expensive, it's a bargain compared to what the beds once went for online, according to the man behind the Craigslist ad.

"Back in the heyday of eBay we were selling these for $3,000 to $4,000 each," says Troy, who doesn't want to give his last name to Daily RFT. "A lot of folks calls people like me kooks, but we prefer to call ourselves 'unique collectors.'" 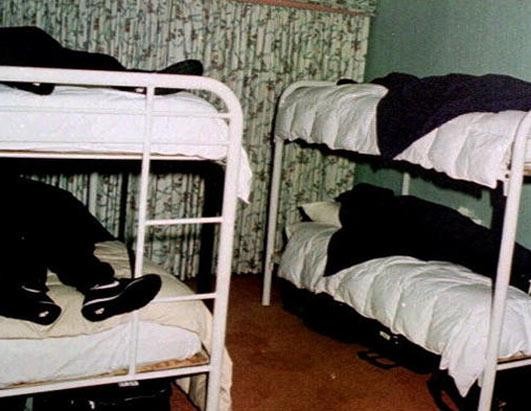 Believers packed suitcases for their space journey and placed them under the beds.
Troy says he and a former business partner bought seven of the Heaven's Gate bunk beds for several hundred dollars a piece in the late 1990s when San Diego County was auctioning off the items it seized from the cult's mansion. When Troy moved from Southern California to Missouri, he took two of the remaining beds with him. They've been occupying space in his garage ever since.