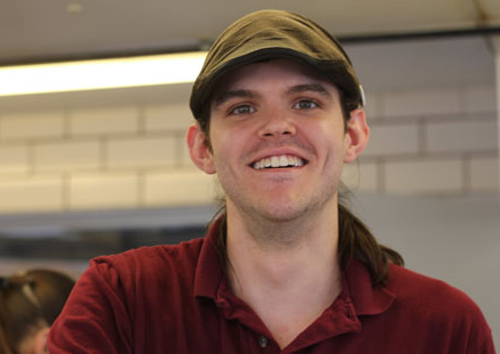 In the two months since his pancake artistry went viral and jettisoned him to accidental fame, Dan Drake saved enough in Christmas tips and gifts to hang up his Courtesy Diner polo and pursue pancakes full-time.

He hid $1,500 in a lockbox in his closet, put in his two weeks at the South Kingshighway diner and began to dream big.

But in keeping with the adventitious rise of south city's "Dr. Dan the Pancake Man," nothing is going according to plan.

Thieves broke into Drake's apartment Monday and stole the lockbox, indefinitely postponing dreams that had only became possible weeks ago.

"That money was going to make it so I could focus on the next chapter of my life," Drake tells Daily RFT. He was dreaming of launching a custom-pancake food truck and going on a national tour before the theft. "When this guy stole this money from me, it was more than just taking money. I'm not greedy. What this money represented was this disgustingly stressful period of my life. I already put this investment in, and now it's gone."

Before he even called police, Drake flipped on his phone camera and posted a video on Facebook to show friends and followers how drastically his luck had changed.

"For the first time in my life, when I go to sleep, I think, 'Let me make sure my knife is by the bed in case this motherfucker comes back,'" Drake says. "That's the angriest and most hurt I've ever been."

In the few days since the theft, Drake's plans have changed. He's not sure how he'll afford to move out of his home, where he says he no longer feels safe, but he's launching a Kickstarter fundraising campaign as quickly as he can to capitalize on his national support and recoup his losses.

Drake is asking for $15,000 to start a mobile novelty pancake catering business -- far less than the $75,000 he'd originally wanted to trick out a brand-new food truck. With his introductory video filmed and his bank account set up, Drake hopes to launch his crowdfunding campaign Friday, weeks earlier than he'd anticipated.

"This screwed around with my plans," he says. Continue reading to see how Drake will spend the $15,000 he's asking for.