Calling All Artists: How to Sign Up for Health Insurance (And Get Free Beer) in St. Louis 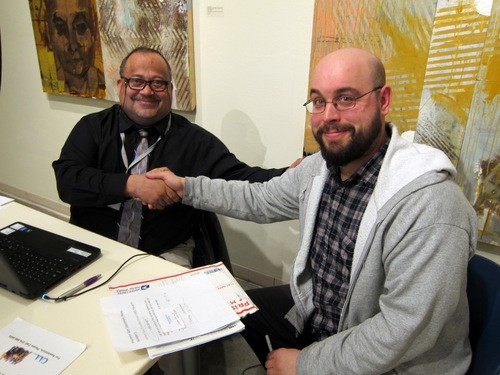 If you caught the hilarious propaganda-slash-comedy sketch that was Between Two Ferns with Zach Galifianakis last week, you might know that the deadline to sign up for health insurance under the Affordable Care Act is rapidly approaching.

This is particularly big news for St. Louis' arts scene, where about 10,000 musicians, painters, poets and more are often working part-time or independently to support themselves while creating art -- making access to health care coverage a challenge.

See also: I'm a Musician: What Do I Do About Health Insurance?

"Getting affordable health insurance for artists has been a major challenge basically forever," says Sue Greenberg at the St. Louis Volunteer Lawyers and Accountants for the Arts. "In many ways, they are just like the rest of the population, but they also tend to have relatively low incomes and work patterns that are episodic. They often are either self-employed or work part-time somewhere."

That "episodic" work structure makes accessing health insurance -- which is cheapest when large groups like a company's workforce can pool their money together -- difficult.

The Affordable Care Act, also known as Obamacare, makes major changes to the healthcare market that could give working artists access to preventative care, emergency coverage and more for lower prices. (Scroll to the bottom of this story for details about a free info session where artists can enroll.)

"This law is really targeted to the people who haven't been able to afford insurance because it is so expensive for an individual to purchase on their own," Greenberg says. "This system is allowing them to be treated as one big group, and that is bringing the cost down." 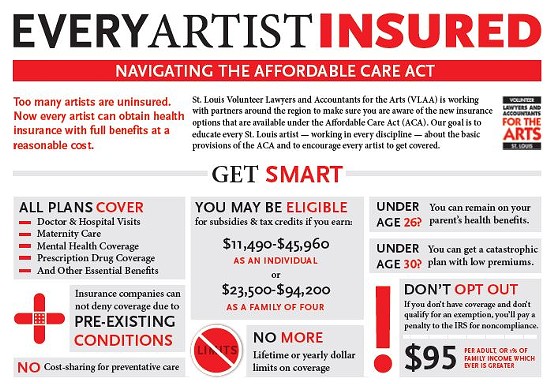 That kind of collective bargaining will make a big difference for Jessica Ruhlin, a local ballerina who works part-time when she's not in rehearsals or class. Getting insurance was even more difficult for Ruhlin before the Affordable Care Act because she has a pre-existing condition: Type 1 diabetes.

On her blog, Bodies Never Lie, Ruhlin writes about "sneaking around" the health care system to get the insulin and other supplies she needs to stay healthy, including buying test strips off a friend's father.

"It's been a nightmare," Ruhlin writes. "I'm actually thrilled to be able to get coverage without being held accountable for a condition that is in now way my fault for having."

The deadline for enrollment is March 31, and Greenberg estimates that of the 10,000 artists in St. Louis, about 3,000 still haven't signed up for coverage.

That's why Greenberg's group of volunteer lawyers is partnering with Saint Louis University Law School students to get the word out in a campaign they call, "Every Artist Ensured." The group has already enrolled artists into affordable health care plans after explaining how the new law affects pre-existing conditions, deductibles, premiums and all the other scary health care jargon out there.

"If it seems intimidating, that's because it is," Greenberg says. "There are people who have never had health insurance. The publicity about this ended up being a lot about the website that didn't work in October, and not so much about what it really meant for people. There was a big information gap."

But now there's help. The SLU Law students Greenberg is partnering with are holding another informational session, "What the Hell is the Health Insurance Deadline All About?" at Nebula Coworking on Cherokee Street. The free event starts at 7 p.m., and tickets are available through Brown Paper Tickets. Experts will explain the law's changes to artists and can even help sign them up.

"Hopefully, some artists have signed up [for health insurance,] but we have to reach the others," Greenberg says.